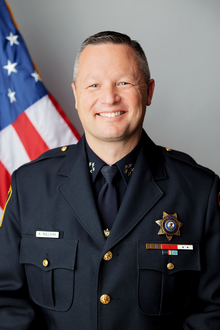 There’s a new sheriff in town and he’s aware of the many cases in which the elderly are being scammed throughout DeKalb County.

“It’s unfortunate that people take advantage of our seniors and they become victims of these crimes,” said Sheriff Andy Sullivan.

The Sheriff will give Farm Bureau members an update in his presentation entitled, “Seniors, Don’t Be Scammed” on Monday, April 4. He is the featured speaker at the Prime Timers program which begins at 1 p.m. in the Farm Bureau Theater.

Sheriff Sullivan will discuss scam alerts, identify theft, and fraud alerts as well as provide resource information. He will also give a crime update for the county.

Sullivan, a lifelong resident of DeKalb, has been with the Sheriff’s Office for 26 years. He has moved up the ranks from sergeant, to lieutenant and chief deputy before being appointed Sheriff in August, 2021.

He is a graduate of DeKalb High School and earned his associate’s degree from Kishwaukee College and bachelor’s degree in criminal justice & leadership management from Rasmussen College. He currently is working on a master’s degree in public management at NIU.

The April 4 program is preceded by lunch at 12-noon in the Farm Bureau Auditorium. Members must register for the lunch by March 29. Lunch fee is $8.