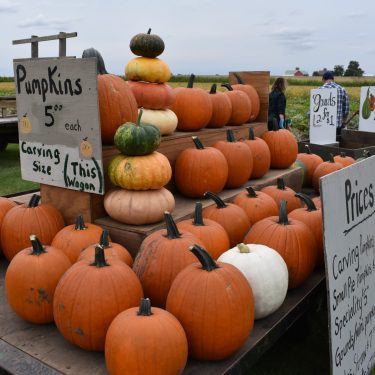 It’s prime time for pumpkins at the Krueger Farm.

Each pumpkin has been hand-picked with love and enthusiasm by the Krueger kids from their patch located on Grandpa’s farm northeast of Genoa.

“It’s a labor of love,” says Marina and Matt Krueger, parents to their five children ranging in age from 7 to 17. All family members get involved from planting seeds to harvesting pumpkins and selling them at The Pumpkin Place of Genoa. 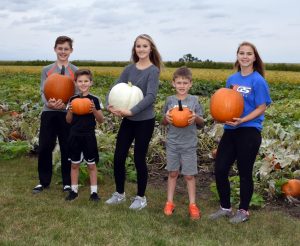 All of the Krueger kids are involved in their family-run pumpkin business (from left) John, Cole, Sydney, Caleb and Sasha The money they earn from selling pumpkins will help with college expenses.

“Raising pumpkins helps the children learn how to earn money by understanding the business – renting farmland from Grandpa, buying seed, and at the end of the season determining their profit,” said Marina.

The pumpkin business was passed down to the Kruegers from their cousins the Neslers and Hughes, who started the business about 12 years ago. This is the second year for the Kruegers. The pumpkin patch is located on Melms Road next to a soybean field at Frank Krueger’s Farm. 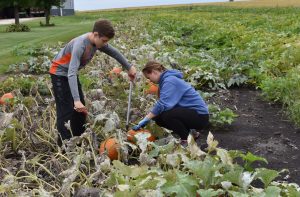 John and Sasha Krueger cut and pick pumpkins from their five-acre patch. They have a good crop of pumpkins this year grown on Grandpa Frank’s farm.

The pumpkin patch has grown from one variety of pumpkins on a half-acre in 2006 to 60 varieties of pumpkins on five acres this year. The Krueger kids expect to harvest nearly 2,000 pumpkins this season.

Some of their favorite pumpkin varieties are: Warty, Swan, Jack Be Little, Baby Boo, Turban, Carver, Cinderelle and Red Stacker.

They sell their pumpkins on the farm, at pumpkin stands in Genoa and Hampshire, and at the Kane County Flea Market. They also grow and sell squash, gourds, straw bales and corn stalks. 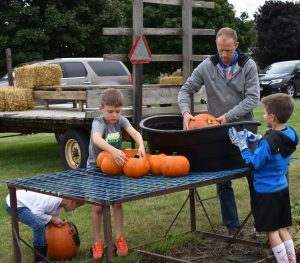 Every pumpkin gets washed before it’s sold. Dad helps Caleb and Cole wash the pumpkins after they have been picked.

“It’s been a good year for pumpkins,” says Matt Krueger, owner of a tax and business advisory firm and seasonal pumpkin farmer. He says the size of their pumpkin patch “is manageable and has been a good family activity.”

Grandpa Frank likes that “it teaches the kids how to work” and he also enjoys “spending time with the grandkids.” He monitors the pumpkin crop during the growing season and uses crop protectants as needed.

The Krueger kids keep busy on and off of the farm. They are active in sports and other school related activities at Genoa schools. All five say they have learned quite a bit about pumpkins. They claim the most rewarding part of being pumpkin farmers is, “When we finish planting all the seeds by hand in June and then we see the amazing results in September!” 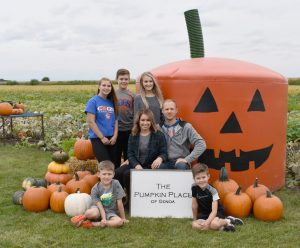 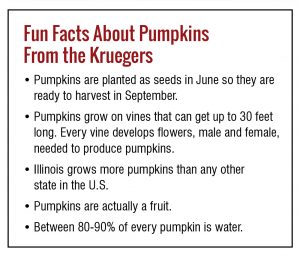 To buy or pick pumpkins:

The Pumpkin Place of Genoa