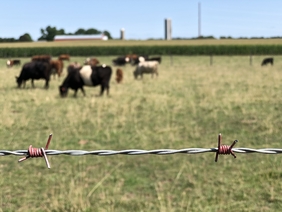 The American Midwest is widely recognized for its remarkable combination of spaciousness and structured land organization.

With hills of grass and grain segmented off into neat, grid-like plots, the region is a prime example of a well-thought-out agricultural industry. Furthermore, few areas are as indicative of the region’s success and impact as DeKalb County.

When driving through DeKalb County, one is sure to notice the pleasant green scenery typical of the Midwest, yet compared with other rural areas, there seems to be a surprising lack of cattle.

Current data for the county shows that there are 17,300 beef cattle on 69 farms. Statistics listed in the 1871 plat map book of DeKalb County indicate that the total headcount then was slightly above 33,000, nearly double of what it is now.

At first this may seem to defy DeKalb County’s historical promise of growth and agricultural entrepreneurship. But DeKalb County’s foothold in the cattle industry can be concluded from an excerpt in From Oxen to Jets: A History of DeKalb County, Illinois 1835-1963 in which John Glidden, nephew of Joseph Glidden, details his first encounter with barbed wire.

John had been tasked with watch duty on his family’s farm in DeKalb near what is now Lincoln Highway. While on horseback, he was charged by an aggravated heifer. John states:

“She made for the horse and with her sharp horns hooked the mare just back of the fore legs and cut a bad gash in her. Of course, Silver plunged and reared. She threw me to the ground and ran off. Crying because I thought she was hurt badly, I made my way in the house.”

Coincidentally, it was only a few days after this event that John first witnessed the prototype production of barbed wire while visiting his uncle, Joseph Glidden. Here, he developed an interest in the product, which thereafter was used to fence in and subdue other trouble-making cattle on Joseph’s farm.

Raising cattle is an arduous task, but it has been made easier and reflected in the work of the farm men and women throughout the county.

The cattle industry of DeKalb County may not be represented by numbers, but with this story in mind, travelers should instead focus on the fields of barbed fencing.