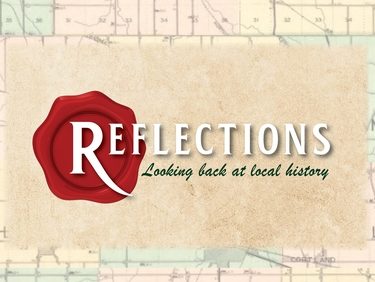 Sycamore’s popcorn stand has been popping for 128 years!

James Elliott was the original owner of the popcorn stand in Sycamore, which he called the “popcorn and confectionary stand.” It was located on the northwest corner of State and Maple streets. Elliott was a farmer and carpenter who “lost his hand in a circular saw.”

Elliott bought the “big, elaborate wagon, resplendent in red and yellow” as early as 1893, from the Kingery Company of Cincinnati, Ohio. It was a horse-drawn wagon mounted on wheels and “Each day Elliott would wheel the stand” from Ryan’s Livery Stable on North Maple to the corner, pulled by a gray horse. “Then at night he would push it back.”

While the popcorn stand stood just across the street from the county seat, changes occurred around it. An interurban railway ran on the half hour from 1902 to 1924 between Sycamore and DeKalb, from in front of the courthouse, past the popcorn stand, to the west side of Altgeld Hall. Automobiles gradually shared Main Street with horses and then abruptly replaced them.

“After Elliott moved away in 1921, local businessmen purchased and refurbished the wagon for Edward Lobaugh,” wrote DeKalb County Historian Phyllis Kelley in 2007. “The wheels were removed and the stand was moved to its location at the southwest corner of State and Maple Streets in 1923, with electricity and gas being supplied from beneath the sidewalk.” Edward Lobaugh and his wife ran the stand until 1943.

During World War II, the Fothergills sold upwards of 3,000 pounds, perhaps due to the limited outlets for recreation in those years. By 1957, demand had leveled off to “around 1,500 pounds of Iowa Hybrid No. 5” per year and Fothergill estimated that all of the popcorn sold over the stand’s counter “would have to be weighed in tons.”

A newspaper account in August 1960, called the popcorn stand in Sycamore “one of DeKalb County’s oldest businesses.”

The Fothergills owned the stand through 1962.

In 1963, Cecile Blake Kartchner “bought the little red popcorn stand in Sycamore” after retiring from Diamond Wire Company and owned it until 1982. In the last two years of business, Kartchner met Jody Mattison. They hit it off, working together at the stand, becoming business partners. Jody bought out Cecile in 1983 and continued to nourish customers from the DeKalb County landmark until 2010 when her daughter, Cassie, took over.

Cassie and Troy Oltman have owned the stand since December 2010.