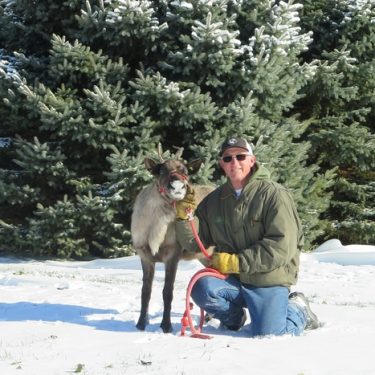 There’s Kringle and Holly, Eve and Ruby, Jack Frost and Buddy. The six reindeer are the friendly caribou creatures at the ranch owned by Randy and Beth Espe. 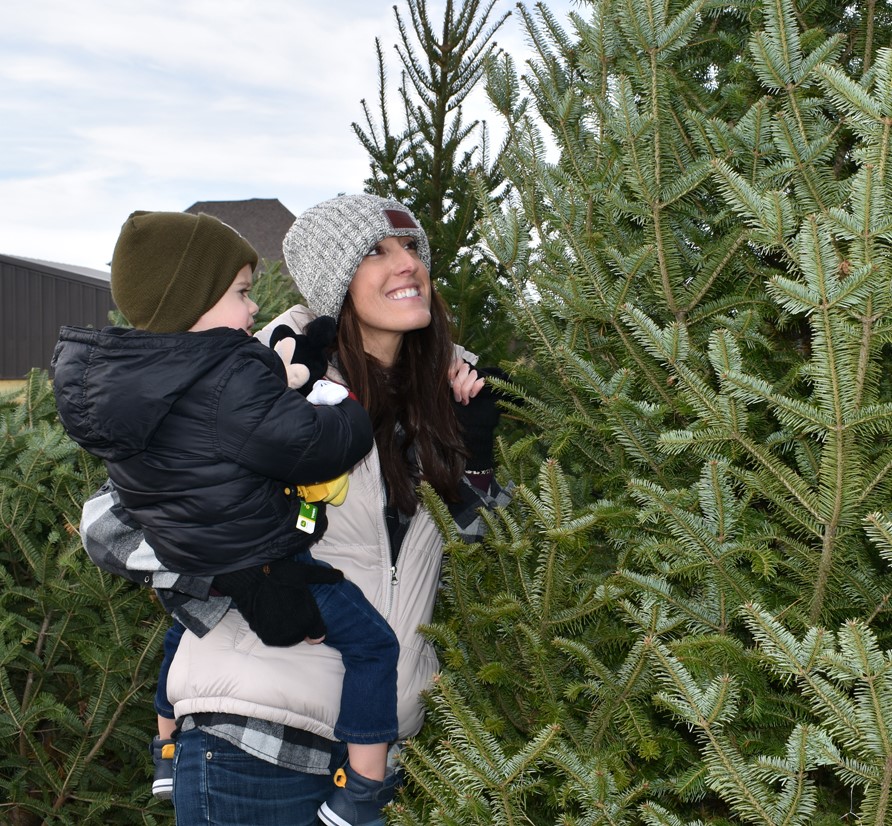 Braxton and April Espe Mapes admire one of the pre-cut Christmas trees which they sold this year. In the future they will be selling u-cut trees at their Shabbona farm.

But as family discussions go, his wife and daughters had other ideas. Sitting around their kitchen table with a picturesque view of their farmstead, they talked about the best use of their rolling 80-acres for conservation and wildlife.

When they acquired the land 20 years ago they put half of it in the Conservation Reserve Program. They planted 9,000 trees on their farmland including a variety of pines, spruce, shrubs, hardwoods, and oaks.

Three years ago the Espes decided to utilize more of their acres to plant Christmas trees – now totalling 6,000. Their growing pine, spruce and fir trees should be ready to sell in a few more years.

“So in the meantime I’m looking at what helps sell Christmas trees,” said Randy. He “googled” to get ideas. And that’s when he was inspired to raise reindeer.

“I always thought Randy would have a petting zoo here,” said Beth. “But not reindeer!” 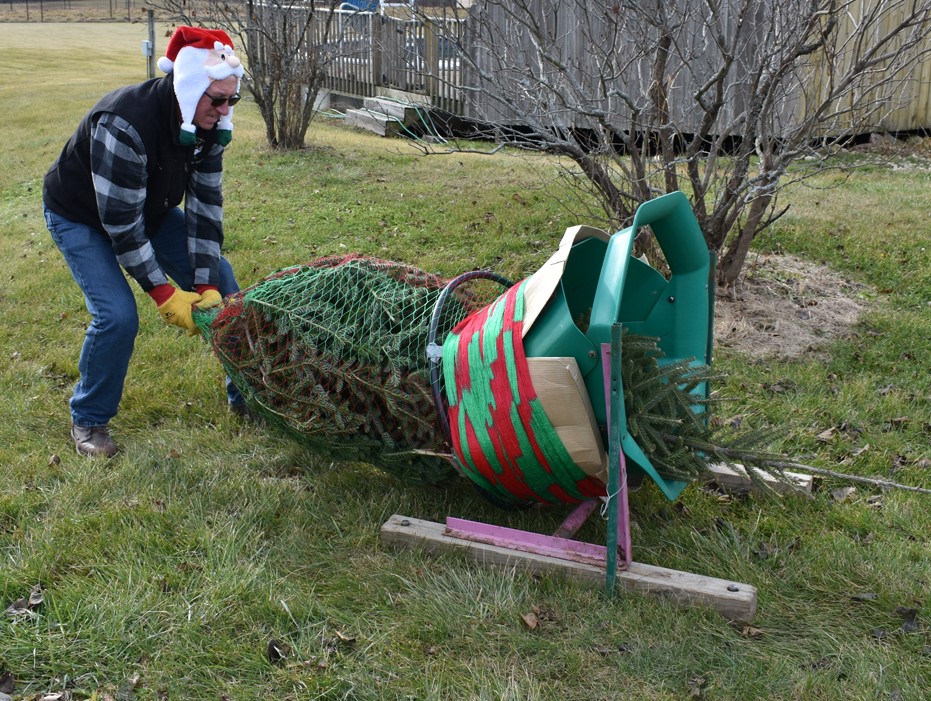 The family warmed up to the idea and last year the Espes acquired their young reindeer from Alaska, New York and Canada. “You just don’t go out and buy reindeer,” said Randy. “I found out there was a two-year wait list to purchase them.”

“Reindeer are ruminants and they are kind of like cattle, but different. They are similar to goats and dogs, because you have to watch what they eat. They will eat anything around them!”

He feeds them a processed pellet food, beet pulp, and hay. And Beth says they like willow branches as a treat. 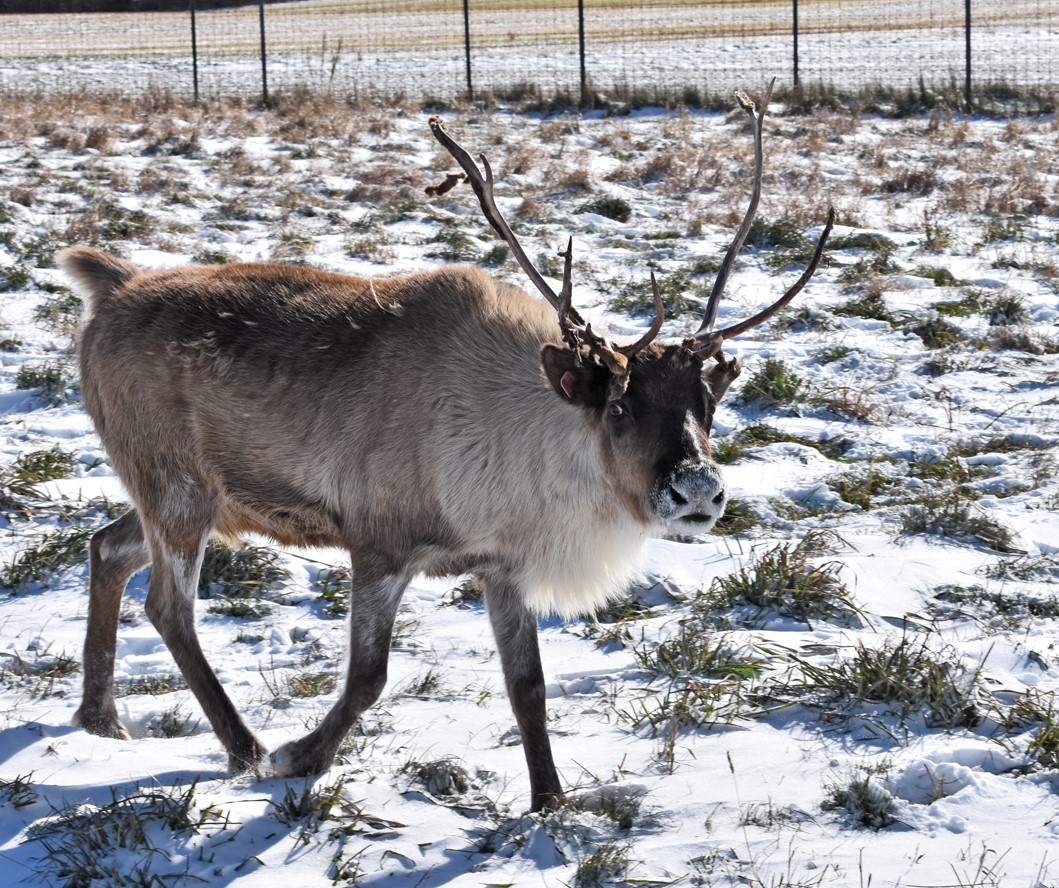 Randy describes their reindeer as being “more like dogs than deer” because of their temperament and personalities. “Each one is different,” he says.

“I enjoy the interaction with them,” says Beth, who helps Randy with the daily feeding and care of the reindeer. “Kringle likes to nuzzle. Holly gives kisses.”

Their domesticated woodland caribou are confined to pasture and sheds within 8-foot fences (so they don’t fly away) that is, until they are haltered and brought out front of the farmstead during tree sales. This year they sold pre-cut Christmas trees grown by a neighboring farmer. Families chose their tree and at the same time enjoyed seeing the reindeer.

In a couple of years the Espes will have u-cut Christmas trees ready on their farm and plan to also offer reindeer sleigh rides. Their reindeer are in training for the sleigh rides.

Where Memories Are Made

With an eye to the future, the Espes hope to make Whispering Pines Reindeer Ranch and Christmas Tree Farm an agri-entertainment venue for families and provide a place where memories are made. 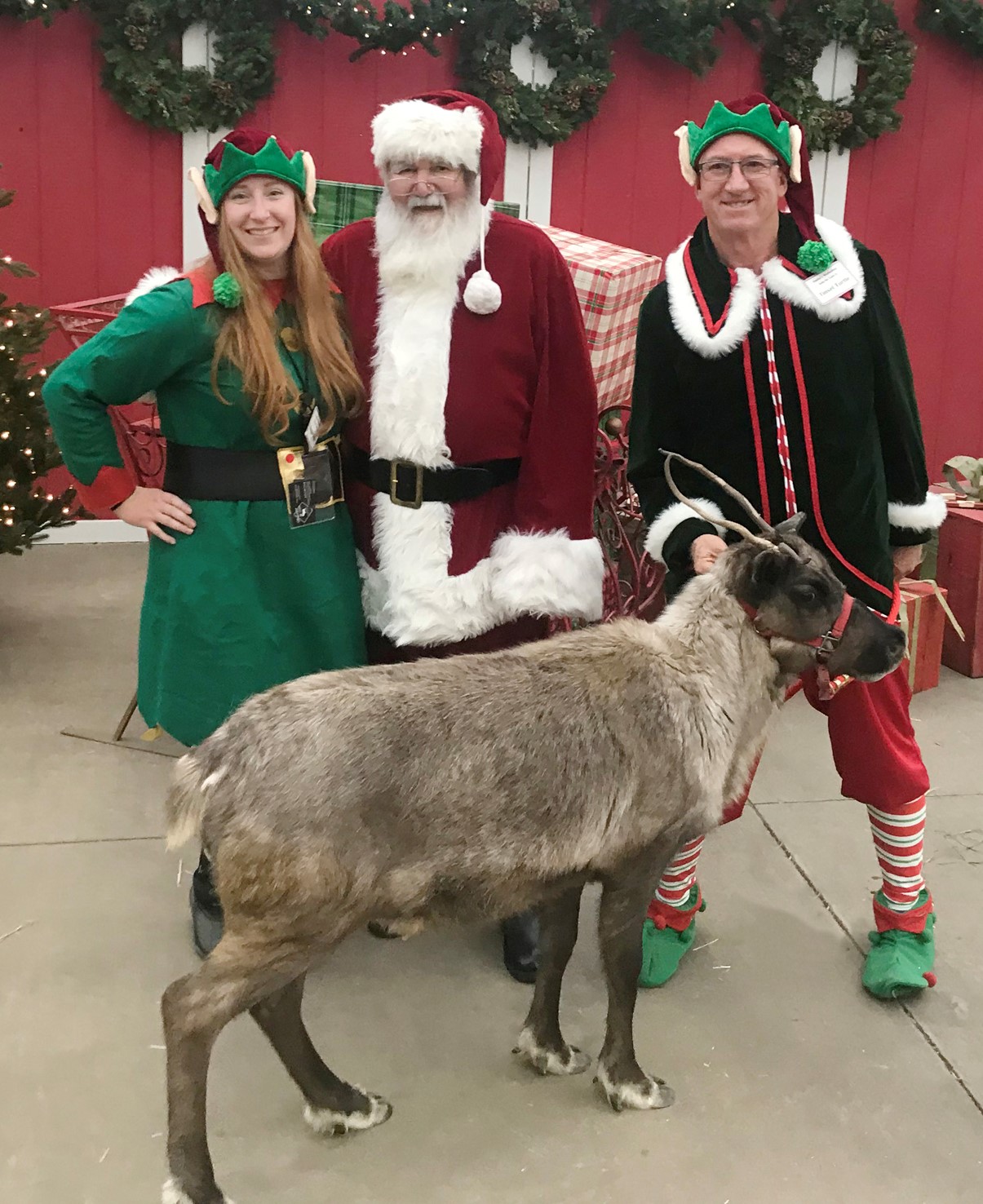 Taking their reindeer to shows makes for some fun days for Elves Allie Espe Maxwell and Randy Espe. Here they are with reindeer Holly and Santa in Downers Grove.

The Espe family is impassioned with their roles of helping make memories. Randy and Beth manage the farm,  daughters Allie, April and Emma (along with their husbands) assist with wrangling the reindeer, marketing, and shows.

Reindeer Kringle and Holly have traveled to several shows during the holiday season with handlers “Head Elf” Randy and “Elf” Allie. They have been to shopping malls, schools, and a Christkindl market to name a few of the northern Illinois shows.

The Espes say that most adults and children “don’t think reindeer are real.” Children ask, “Are these Santa’s reindeer? Do reindeer really fly?”

They tell them that their reindeer are in training.

At the shows, the businesses which hire them want assurance that the reindeers have a good rack of antlers. It’s the standout feature that most people relate to from story books. The unique thing about their antlers is that the male antlers are larger than the female antlers and they shed them every year (males in January, females in the spring) and grow a new set the next year. 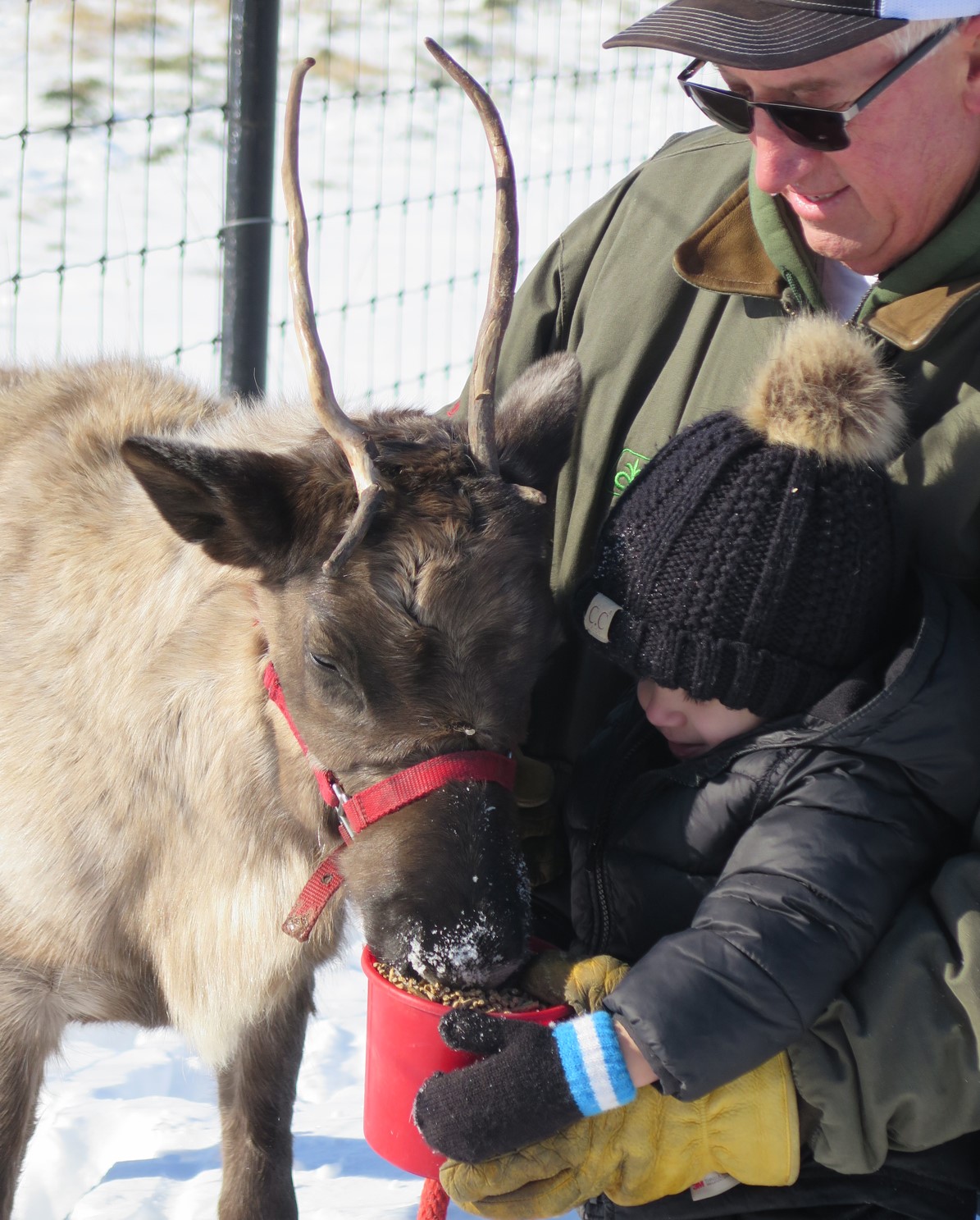 After a year of raising reindeer, Randy wants to triple the herd size by breeding his heifers. It’s something that he can now focus on in retirement after a lifelong career in the seed industry. “I say I’m retiring but really I’m switching careers to raise reindeer.” The same goes for Beth, who retired last year from her job at NIU.

The Espes say their biggest family battles have been “naming the reindeer” and “naming their ranch.” The family gathered around the kitchen table to some heated discussions on names. Randy won out with the ranch named after Zac Brown’s song: “Colder Weather” with lyrics which refer to “Whispering Pines.” As for the reindeer names – it was a lot of “give and take.”

The Espes promote tree sales and reindeer through social media and a website: www.whisperingpinesreindeerranch.com. They are already making plans for next year’s holiday season. 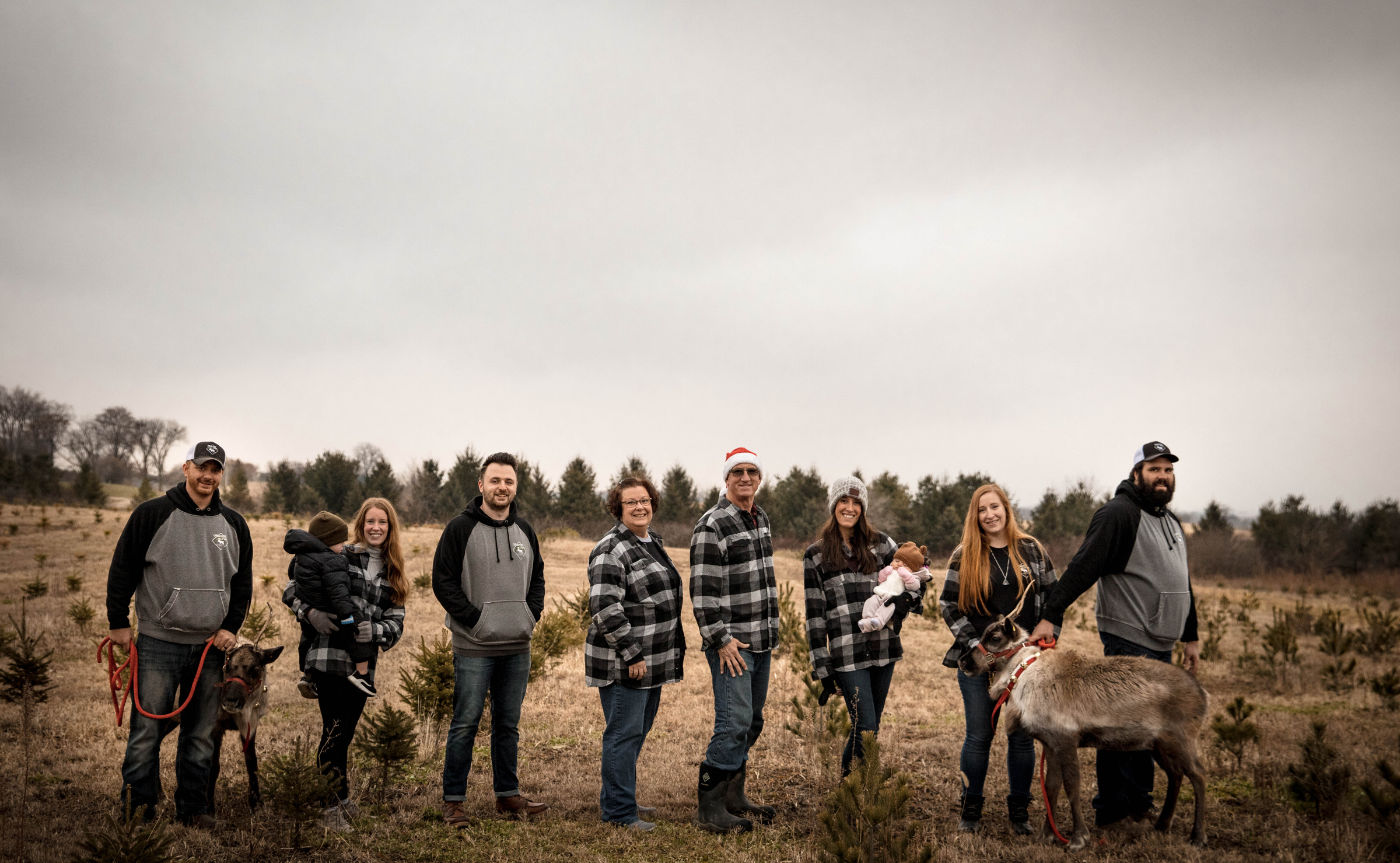 Raising reindeer and growing Christmas trees are new ventures for the Espe family on their Shabbona farm. They are (from left) Max Mapes, Braxton Mapes, Emma and Sam Jennings, Beth and Randy Espe, April and Briar Mapes, Allie and Dolan Maxwell. Photo courtesy of Abigail Vaessen

Around the kitchen table with a view of their frolicking reindeer and a cup of coffee, the family talks about changes. They want a larger trailer for hauling the reindeer and a sleigh to shows. They hope to further their educational efforts so others learn more about the caribou, with signs and information. Their new Lapponian herder dog named Willow (because it’s the reindeer’s favorite treat) is in training to herd the reindeer.

“All of what we are doing is in preparation to sell trees and have more reindeer for people to enjoy,” said Randy. “This part of retirement is fun for us, our children and grandchildren.” 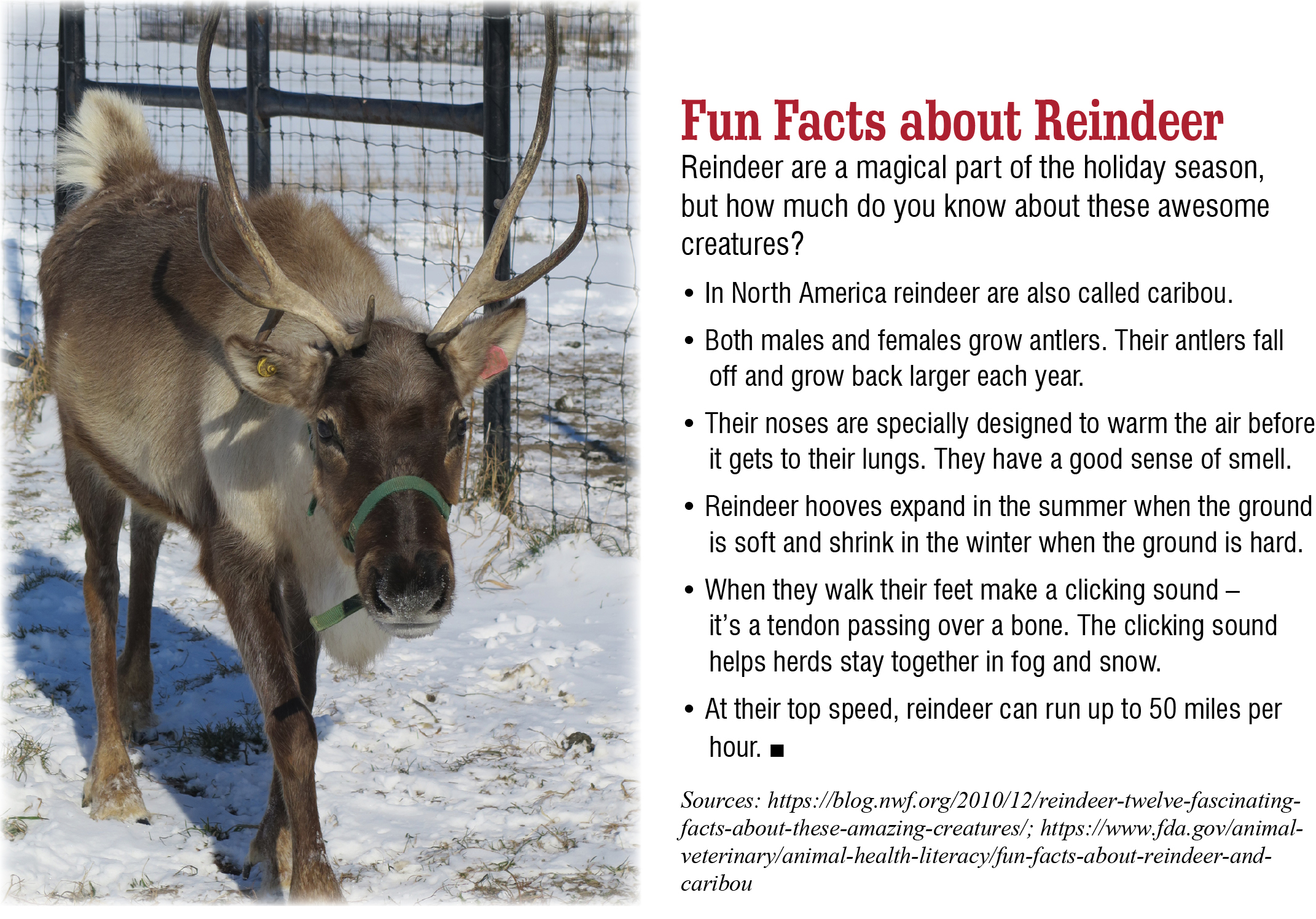