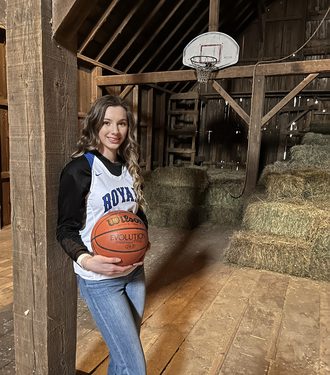 She broke the 39-year Hinckley-Big Rock girl’s record for the most points in a season, racking up 707 points her senior year. She ended her basketball career with 1,186 points joining an elite group and being in the top 10 of Lady Royals who exceeded 1,000+ points in high school.

“I didn’t think I was going to make it,” said Ashleigh. “At the beginning of the season, Coach Brewington said, ‘There’s a goal I want you to reach. If you average 15 points per game you will slowly get to 1,000 points.’”

With a lot of hard work and fortitude she made it. Ashleigh averaged 21 points per game. Her personal best was 33 points in one game.

“Ashleigh is a program changer,” said Royals Coach Brewington. “Not only is she one of the best players I’ve ever coached, she constantly raises the bar with her work ethic and determination.”

Her work ethic and competitive edge comes from being a farm girl. She raises and shows pigs, takes care of her horses, and helps where she’s needed on their family farm. “I’ve learned to juggle a lot at once with farm animals and sports,” she said.

“I am competitive in the show ring and on the basketball court. I continue to learn and adjust to improve with my pigs at shows and myself in basketball,” continued Ashleigh.

She shows her pigs at local fairs with her best year being last year winning reserve champion with her purebred Duroc barrow at the Sandwich Fair.

Ashleigh gives credit to her friends for her interest in showing pigs and choosing sports. Her friends convinced her to go out for basketball in 8th grade. She explained that she could steal almost every ball then but a layup was “her worst nightmare.” “I couldn’t shoot, play defense, or know what way we were going; however, I knew how to be a teammate, be aggressive, and have fun with my friends.”

Her basketball skills changed her junior year. “It was the year I got a big spark and stepped up my game,” noted Ashleigh.

But her basketball season was cut in half her junior year due to the Covid-19 pandemic restrictions. It made her practice harder, not from the high school gym but from the farm. She adapted by shooting baskets in the hay mow into a hoop mounted to the barn beam, to be ready to shine her senior year.

And shine she did. She was named to the Little Ten All-Conference Team and Illinois Basketball Coaches Association 1st Team All-State (1 of 10 players in the state selected).

This Lady Royals guard will tell you that the awards and honors are nice but the best part of her basketball career was “being with friends on the court.” “It’s more about the chemistry on the team. Without chemistry you aren’t going to win. I like to win, but I also like to have fun!”

Ashleigh claims she exudes a “weird sort of funny” and likes to “mess around during practice, even while doing sprints.” By doing this, she gets her teammates to loosen up and enjoy the sport.

As one of three seniors who shared the basketball team captain title, she helped younger classmen improve their game and give them confidence. “Ashleigh is a leader on and off the court,” said Coach Brewington. “She supports her teammates, the underclassmen, the middle schoolers and volunteers her time to help run youth camps for the elementary school.”

“Ashleigh is leaving the Hinckley-Big Rock Girls Basketball Program better than she found it,” said the coach.

As a three-sport athlete, Ashleigh is now playing soccer, a sport she has loved playing since she was in second grade. She also played high school volleyball.

The star athlete, whose nickname is Ash, is on top of the world her senior year. She sums it up: “It’s been a good year!”

After high school she plans on going to a community college to play basketball/soccer. Then becoming a veterinary technician to work with animals.