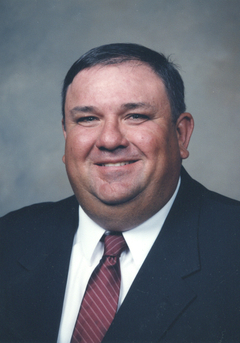 Joe Barshinger was a quiet leader. He spoke when necessary and let his actions speak louder than his words.

“He was just that type of guy,” said his wife, Phyllis. “He was usually behind the scenes doing the brunt work and helping others – at church, on the farm, and in the community. He was a leader, not by voice, but by his actions.”

Joe previously served on the DeKalb County Farm Bureau Board of Directors for 18 years and was a graduate of Farm Bureau’s ALOT program. He was a former secretary and membership chairman of the DeKalb Area Pork Producers and cooked a lot of pork chops through the years.

Also, Joe was a servant of his church being a trustee and on the church council for many years. His theory was “everything would work with God’s help,” according to Phyllis.

In the community, he was active in the Shabbona Lions Club helping with various local events as he naturally thought of helping others. 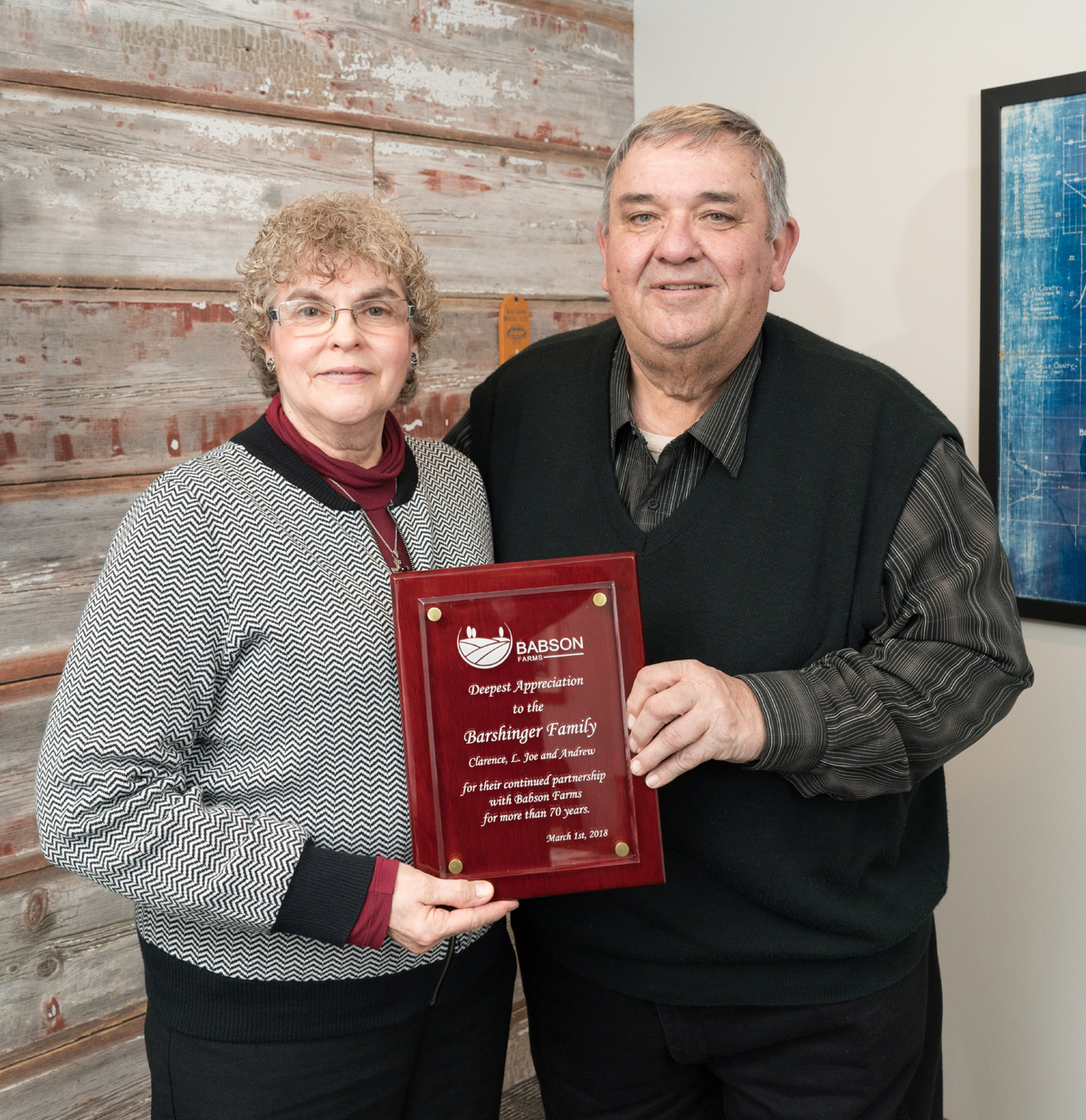 Joe Barshinger farmed in partnership with Babson Farms. Last year, he and his wife Phyllis were honored by Babson Farms for more than 70 years of a continued family partnership.

The Shabbona farmer maintained a strong interest in 4-H and FFA, during his youth, and then as an adult he supported his children and others. “He lived by the FFA Motto: Learning to Do, Doing to Learn, Earning to Live and Living to Serve,” stated Phyllis.

Joe’s service in his community did not go unnoticed. Those who knew him recognized these commendable qualities in the gentle farmer along with an infectious smile and good sense of humor. That’s why it’s not surprising that after Joe’s death, his friends arranged a tractor ride in his honor in rural Shabbona and people attended a pork chop barbecue at the Lutheran church in Lee to remember Joe, among other kind gestures.

Joe, 72, died unexpectedly in April in a farm-related accident. He is survived by his wife, Phyllis, and adult children Jonie Barshinger (Mark Cox) of Waterman, Kelley Gebel of Davis Junction, and Andrew (Shelley) Barshinger, of Leland, and grandchildren Anna Cox, Jonathan, Lillie and Kelvin Gebel, and Kennedy and Landrey Barshinger. He was the oldest of three siblings, surviving him are Kay (Randy) Thorsen and Jack (Susan) Barshinger, both of Waterman. 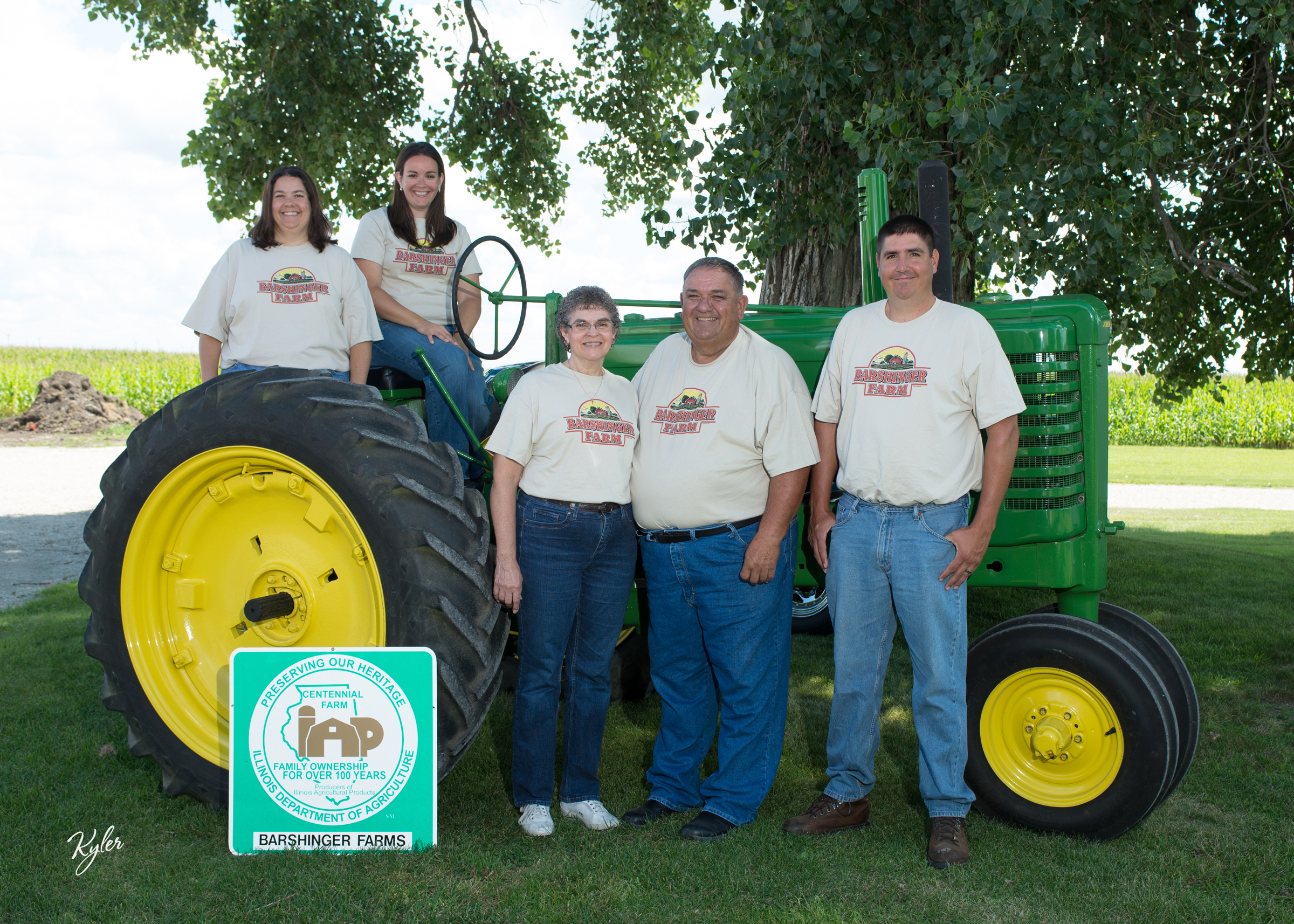 The Barshinger Family is proud of their farming heritage, including having a Centennial Farm and restored John Deere family tractors. Shown with the 1950 John Deere A tractor are (from left) Jonie, Kelley, Phyllis, Joe and Andrew Barshinger in 2013.

Because of the generosity of so many people, the Barshinger family has established a scholarship fund with the DeKalb County Farm Bureau Foundation from memorials received. The Joe Barshinger Memorial Scholarship will benefit students graduating from Indian Creek High School who plan to attend a community college, university or trade school (see details next page).

“A scholarship seemed fitting to honor Joe and at the same time help young people,” said Phyllis. “Joe would not like this limelight, but he would be pleased that others are benefitting.”

Joe was a lifelong grain and livestock farmer who was proud of his farming heritage. He farmed in Shabbona and Waterman, which included the family’s Centennial Farm.

He farmed in partnership with Babson Farms – formerly with his father, Clarence, and then with his son, Andrew. He was honored last year by Babson Farms for more than 70 years of a continued family partnership.

In his spare time, Joe enjoyed restoring family-owned tractors and participating in tractor drives, collecting old farm signs and going to auctions. He was particularly interested in history – especially family and agricultural history.

He made every effort to attend his grandchildren’s activities and appreciated the time they spent with one another on the farm.

Joe also loved to travel – he and Phyllis had plans to travel to France for their 50th Anniversary which they would have celebrated last month.

“He was a generous man, a real giver,” said Phyllis. His last gift that he gave was as a tissue donor. And now we are giving on his behalf in the form of a scholarship.” 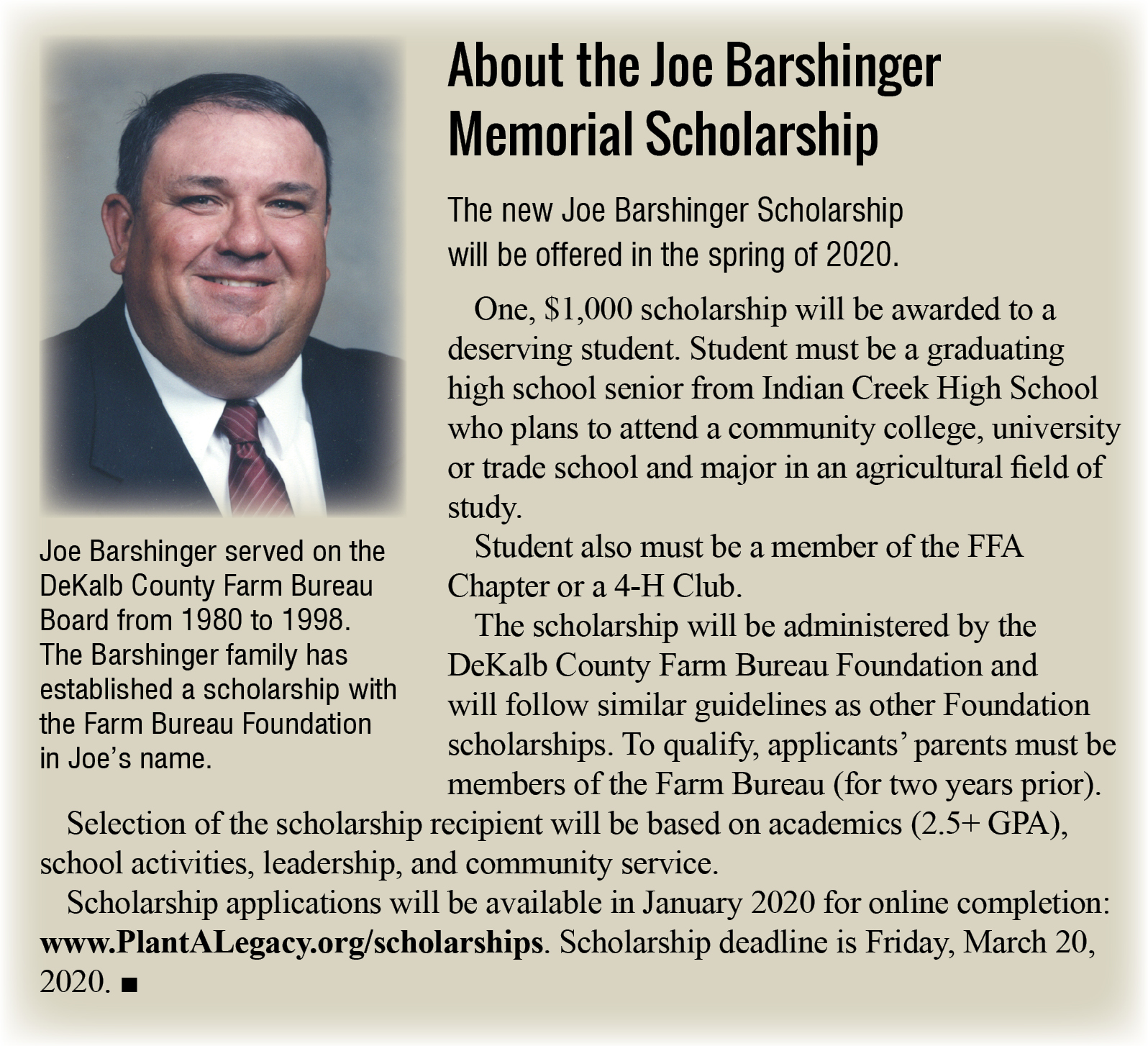 You can make a donation to the Barshinger Scholarship Fund through the Foundation website: www.PlantALegacy.org or contact the Farm Bureau Foundation at 815-756-6361.