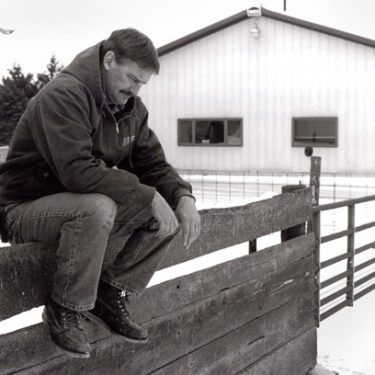 The Hartmann farm family understands the value of educating others about agriculture. The Maple Park-based family especially wants local teachers to help students connect to their source of food and fiber.

The family has endowed a gift to the DeKalb County Farm Bureau Foundation for Agriculture for teacher scholarships in memory of lifelong farmer Jeff Hartmann.

The new Jeff Hartmann SAI (Summer Ag Institute) Scholarships will assist with course fees for teachers who participate in this annual institute sponsored by the DeKalb County Farm Bureau.

The Summer Ag Institute provides professional development and college credit for the week-long course for preschool to high school teachers.

SAI equips educators with knowledge, understanding and tools to infuse agriculture into their own teaching. The course features farm and agribusiness tours, activities and lessons, discussions about food production and so much more.

“We think it’s important for people to understand where their food comes from,” said Sari Hartmann, Jeff’s wife. “Jeff was all about farming and he would be happy that we started a scholarship in his name for the purpose of educating teachers and their students about food and farming.”

Gerry and Nancy Hartmann, Jeff’s parents, agree that it’s one way to honor their son and benefit agriculture for years to come.

Jeff’s life was cut short by his unexpected death six months ago, at the age of 60.

Farming Was His Legacy

Jeff Hartmann always wanted to be a farmer, following in his father and grandfather’s footsteps.

“His first love was farming,” said Sari. “He loved harvest time. He would sit back and watch the grain dryers and be content with the culmination of everything being done.”

Growing up on a grain and livestock farm in rural Sycamore, Jeff showed livestock at FFA and 4-H fairs.

After graduating from Sycamore High School, Jeff attended Western Illinois University, where he began dating Sari Huftalin. They knew each other based on their parents’ friendship. Both the Hartmann’s and Huftalin’s were pork producers.

Jeff and Sari were college sweethearts and married shortly after graduation. Jeff earned his bachelor’s degree in animal science.

“He was able to pay for his college with the money he earned farming and selling his livestock,” said his mother, Nancy.

Upon returning to the family farm, Jeff worked in partnership with his father, Gerry and brother, Doug. Jeff, a 4th generation farmer, was in charge of the grain side of the farming operation. He oversaw the crops, marketing and machinery. He embraced the latest technology with farm equipment.

The Hartmann home farm base is located southeast of Sycamore. Jeff and Sari lived on their farm north of Hinckley where they raised their two children, Noel and Brice.

Outside of farming, Jeff was supportive of Sari’s involvement in Ag in the Classroom (AITC), serving as chairman of the Farm Bureau committee and training volunteers to go into classrooms and share farm messages. Sari did AITC presentations for several years, something that Jeff wasn’t comfortable doing. “He didn’t like the limelight but was supportive and understood the value of serving the community.”

Jeff was a member of the DeKalb County Farm Bureau Board of Directors, 1991-1996, and was a graduate of the ALOT (Ag Leaders of Tomorrow) program. He also served on other ag-related boards, the drainage district and the school board.

Reflecting on Jeff’s legacy, Sari said he will be remembered for “raising two great kids” and “being involved in his community.”