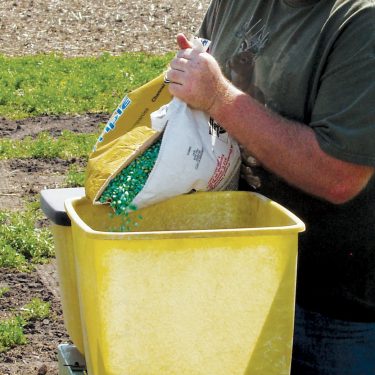 Insect pests can harm crops in the early stages of emergence, by damaging young plants and by acting as vectors of viruses. Seed treatments can provide protection from these above-and below-ground insects.

Fungal diseases can stop the growth of an emerging seedling or harm the plant. Controlling these diseases helps with the development of a healthy root system – the basis for optimal crop establishment and yield production. 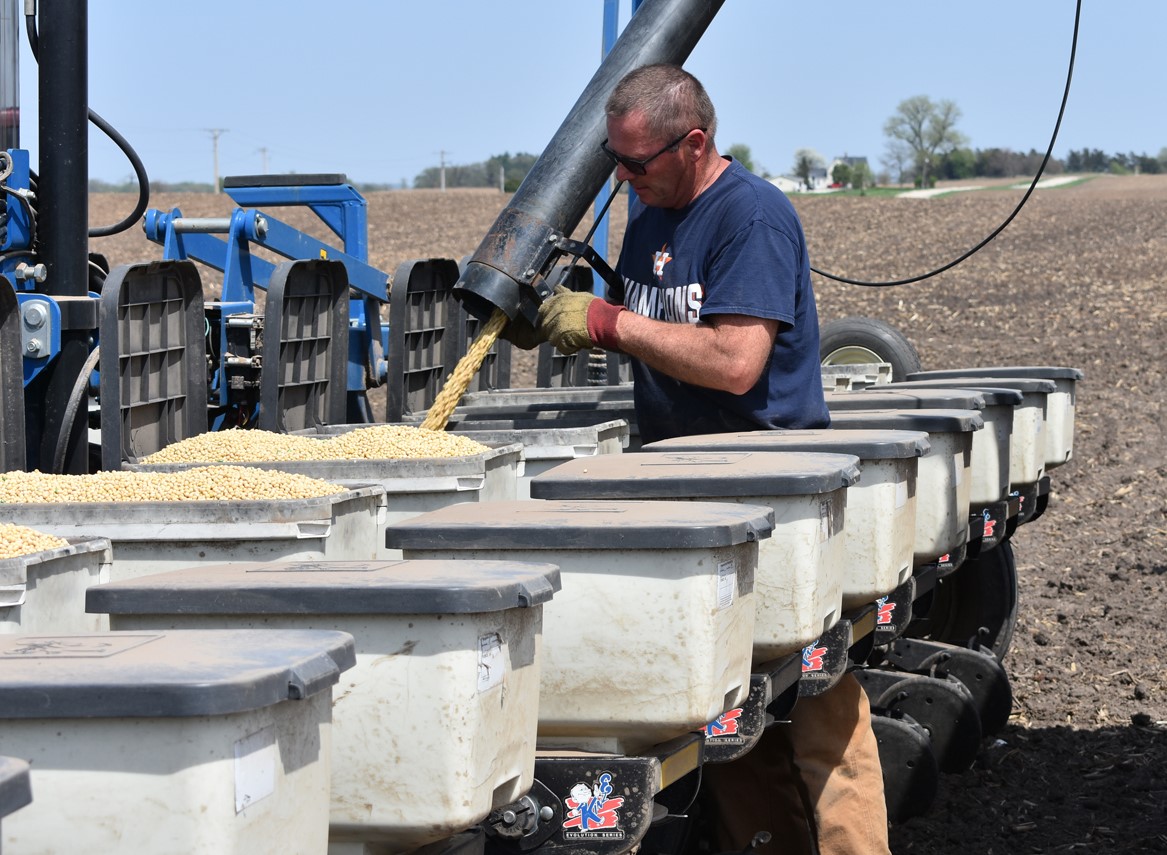 John Weberpal, Sycamore farmer, fills his planter with soybeans. Most farmers use seed treatments to get seedlings off to a good start and boost performance.

For most farmers, seed treatments have become a standard management practice to get seedlings off to a good start and boost crop performance. With farmers planting earlier, there is a high risk for seedling injury with colder weather and wetter soils so seed treatment guards against these weather issues too.

Each seed company has its own color of seed treatment. Some companies use a green color to pre-treat the seed with insecticide or fungicide. Another company may use a pink or blue color.

Companies coat seeds with these chemicals for planting purposes only and not for food or feed uses. In fact, protocols in place dictate that treated seed can only be used as seed.

The seed treatment is on the outside of the seed and lasts about a month. So the color goes away once the plant is well into the growth stage. The mature seeds which are harvested are your true golden kernels of corn and tan soybeans. 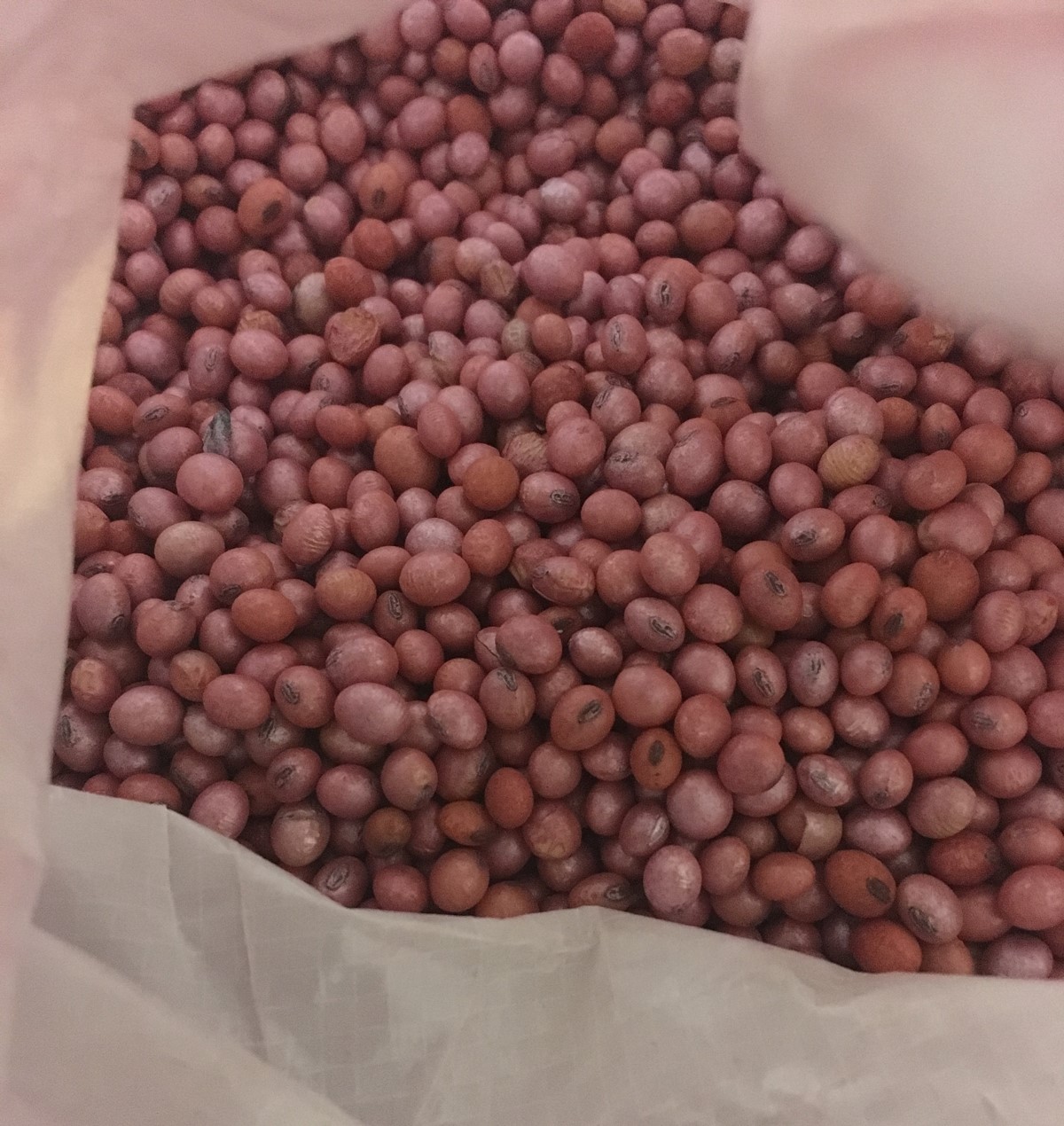 These soybeans were treated with insecticide and fungicide for planting purposes only and not for food or feed uses.

Seed treatments can be a more environmentally friendly way of using pesticides and insecticides, as the amounts of the products used can be very small and the chemicals are in the seed, not on the ground, on the plant or in the environment. The colorant of treated seeds is not appealing to birds as well. Treated seeds also minimize the exposure of chemicals to wildlife and are deemed more beneficial to soil organisms.

When Bt (Bacillis Thuringiensis) corn hit the market in 1996, that single gene that protects itself from the corn rootworm beetle, required the establishment of a 20% refuge. The refuge would help ensure that resistance would not occur.

Resistence will eventually happen (because insects are live creatures and evolve), but farmers can take steps to try to slow the process. One of the steps for Bt traits is to plant a refuge crop.  A refuge would be a non-Bt variety of corn planted in the same field as the Bt corn. Basically, this allows some of the insects (like corn rootworm) to survive and produce offspring that are susceptible to Bt corn (they will die when they feed on the plants).

Farmers who grew Bt corn then were required to plant 20% of their field in refuge. So they planted 80% Bt corn and 20% non-Bt corn in a field.

Now we have Refuge-in-a-Bag (RIB), which means that the refuge seeds (non-Bt) are mixed with the Bt seeds. The RIB guarantees compliance with the refuge rules. In fact, the percent of refuge has been lowered to 5%. 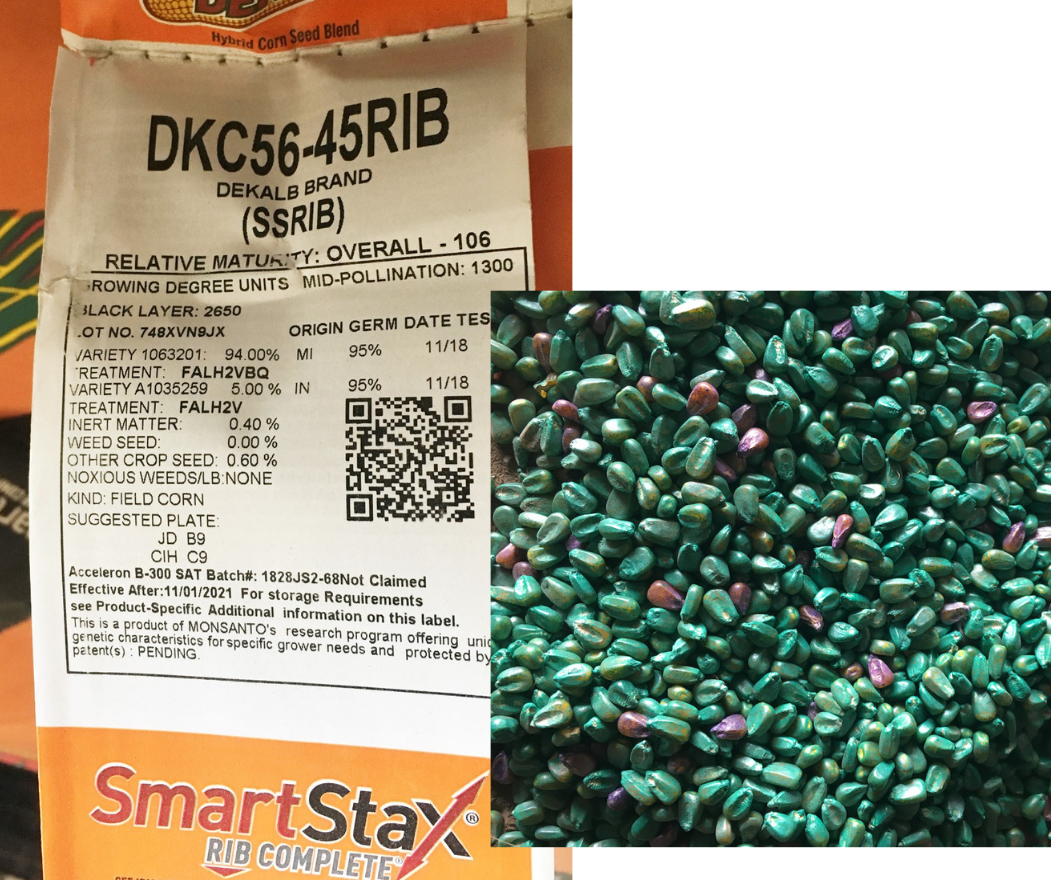 Planting a refuge presents resistance, and guards against losing valuable technology like the Bt varieties. Seed is an expensive investment for farmers, as they pay more for traited seeds, so they naturally want to protect their investment.

Farmers understand how important it is to protect their crops from diseases, insects, and  nematodes as well as moisture and nutrient stress. That’s where seed treatments help.

Seed treatments provide protection for a variety of different diseases and pests.

Some of the common corn diseases are Fusarium and Pythium. Insects such as black cutworm, white grub and wireworm can devastate a crop. Nematodes like lance and lesion nematodes can be problematic.

Some common soybean diseases are: Phytophthora and Pythium. Insects like bean leaf beetles and aphids are threats in soybean fields. Nematodes, such as the Soybean Cyst Nematode, have been a challenge for soybeans.

Research shows soybean yields may be reduced by an average of 2.5 bushels per acre due to early season seed rots and seedling blights. Fungicide seed treatments help prevent these diseases.