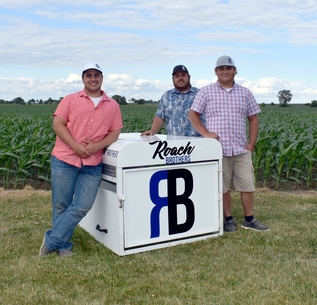 Nick Roach vividly remembers his first year of showing sheep. Days before the 4-H fair he sheared the thick fleece of wool from his young ewe in preparation for the show. It’s then when he realized his sheep was “really skinny.”

“I placed second to last at the show,” explained Nick. That humbling experience and his competitive nature got him charged up to do better the next year. He learned more about raising good quality sheep from local producers who advised him on an improved feeding program for his show animals.

With a lot of good guidance from producers and a better eye for selecting show ewes, he won Grand Champion Market Lamb for the next three consecutive years at the DeKalb County 4-H Fair, 2014-2016.

His first winning ewe was bred and produced several more winners for him and his brothers including Grand Champion Market Lamb in 2017.

Nick, 22, now supports his brothers by investing in their show stock. Logan, 19, and Brian, 17, have had their share of wins in the show ring with sheep and market hogs. They show at a dozen or more county and state fairs as well as jackpot shows and international livestock expositions.

“I love to be successful,” says Logan, “because then our hard work has paid off!”

When Nick Roach won his first grand champion at the county fair bystanders asked, “Who is this Roach boy?” It was not a farm name that many recognized.

Matt Roach, their dad, says his family has a long-line of ancestors who farm but he was one who didn’t. He’s an electrician and his wife, Stacey is in retail. The Roaches reside on the north side of DeKalb.

Before the boys became interested in farm animals their focus was on wrestling. Matt was a wrestler in his younger years and likewise his boys were into wrestling. Matt coached the DeKalb youth wrestling team which included his boys who were quite competitive. “We went from one arena of screaming and cheering to another where you don’t say a word to avoid spooking an animal.”

Logan, Nick and big brother Alex, 24, also played football at DeKalb High School. But having some sports injuries, their interest shifted to showing livestock. They “hung around” their farm and FFA friends who got them interested in cattle, sheep and pigs.

“At first the boys had animals at the farms of the Willretts, Govigs and Schneiders,” Matt mentioned. “They were tremendous and opened a whole new world for them.”

When Matt realized their interest in livestock was genuine, he asked his retired aunt and uncle if the boys could use one of their empty barns for animals on their DeKalb farm. The Bridges agreed to let them modify the inside of the barn with pens for pigs and sheep and a few cages for rabbits.

“They were gracious enough to allow the boys to raise their show animals and sheep flock here,” said Matt. An added bonus is pasture for the sheep to graze and plenty of farmyard space for walking the animals to get them ready to show.

It takes about 15 minutes to get from their DeKalb home to the farm on North First Street. And the boys make the trip daily to feed and care for their animals.

“We didn’t have the farm background that other farm kids had but we learned how to raise animals with a lot of good help from our farm friends,” said Nick.

Raising and caring for farm animals is not for the faint of heart. “We’ve got a lot to do,” says Logan, “especially during lambing season to check on the ewes birthing every four to six hours.”

But the brothers all pitch in and help one another. Logan and Brian, with part-time jobs, spend more time on the farm than their older brothers who have full time jobs. Alex is a mechanic at a local farm and Nick is a senior at Oklahoma State who works for a show cattle company.

The Roach boys spend numerous hours in the barn with endless chores of feeding the animals and cleaning their pens. Then there’s the regular washing, clipping and grooming, and exercising the sheep and pigs. The boys will tell you it takes blood, sweat and tears to raise a champion animal.

“You can’t take a day off from the animals,” said Logan. “They need you.”

Brian says, “I’ve learned to have patience with them. Especially when we are teaching the sheep to lead well for the show.”

The hard-working boys like animal agriculture for showing off their finest and as a future career. Nick hopes to secure a job in the livestock industry next year. Logan is a student at Joliet Junior College majoring in agribusiness. Brian will finish his senior year at DeKalb High School and then go to Kishwaukee College in diesel mechanics.

“I’m proud of the boys,” said Matt. “They do all the work with the animals. My wife and I give them the tools and we are their support system. They have learned responsibility and discipline. And they have made sacrifices in order to accomplish what they have.”

It’s not all about the purple ribbons

The Roach Brothers strive for the top spot in the show ring but admit it’s not all about the purple ribbons, shiny trophies or champion plaques.

“It’s about the animal and raising it for our meat supply,” said Logan. Being on JJC’s Livestock Judging Team, he has a trained eye to look at an animal’s genetic lines and structure.

Nick also has a knack for identifying top livestock based on his college experiences and hands-on work of fitting and grooming animals for national shows.

Besides showing livestock, the Roach Brothers are breeding and selling their stock to other showmen – as far as California and Oklahoma.

The brothers created a logo for their show business and a Facebook site: Roach Brothers Show Stock. It’s one way they are marketing and selling their show animals. “It’s a nice way to network and expand our customer base,” said Nick.

Alex, who started the family show tradition with cattle, maintains this overall perspective of everything he and his brothers have accomplished: “We’ve always had a good attitude about taking care of animals. It’s hard work and we like to work hard. Showing has been a good hobby for us. We’re proud to show off what we have done.”