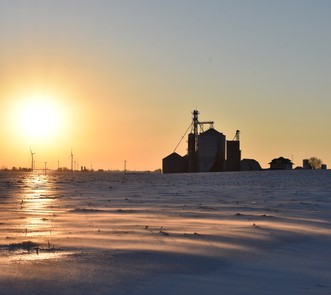 Farm fields are covered in snow so what impact does that white blanket have on farmland? How does this winter compare to other winters?

As you shovel snow from your sidewalk you’re probably not thinking about the value of snow. It does provide benefits to both your lawn and farm fields.

• Snow provides soil moisture crops and plants need to grow. A common rule of thumb is that ten inches of snow equates to one inch of water.

• Snow also contains trace amounts of nitrogen from the atmosphere and will act as fertilizer for the next crop.

• Snow insulates the dormant crop and provides a blanket for winter wheat fields.

In a typical year, the DeKalb County area averages about 32 inches of snow. This winter, by Jan. 31, we had a total accumulation of 24 inches.

“This year we are running about two to three inches below average each month in Northern Illinois,” reports Dr. Trent Ford, Illinois State Climatologist, “or about 90 percent of normal.”

“The winter has been mild with temperatures on the warm side of average. As we get closer to spring I expect the weather will be more active with more precipitation,” Ford said.

But hold on, winter isn’t over yet. “Expect to see more snowfall in the next couple of months,” said the state climatologist. “Forecasts show an active system in February and March.

Based on weather models, Ford anticipates the northern part of the state will be in good shape with moisture come spring. But the central part of the state is seeing a real deficit in precipitation. “Central Illinois has been constantly below average since July,” Ford said.

Ford said La Niña conditions are expected to persist into early spring with February through April expected to be warmer and wetter through the winter-spring transition.

As he analyzes weather systems, Ford doesn’t think Northern Illinois will be faced with an excessive amount of precipitation for spring planting. “Farmers in Northern Illinois should have adequate soil moisture, not excessive, which should make for a smoother planting season.”

Cornstalks covered in snow? Driving along Annie Glidden Road on the southwest side of DeKalb you may notice rows of corn stalks covered in snow. The field corn was left there intentionally by farmer Roger Faivre as a snow fence to catch snow drifts. The 12 rows of corn in the half-mile stretch minimizes the amount of snowdrift on the highway and has reduced the number of accidents. Faivre has been providing the corn snow fence for the last 10 years in cooperation with DeKalb Township. In the spring he will plow down the cornstalks to prepare the field for the next crop.