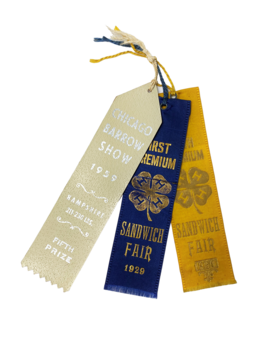 The Suddeth Family has been showing pigs since 1923

Joe Suddeth remembers his show days like it was yesterday.

The thrill of following his black and white belted pigs into the show ring was the highlight of his youth. His daily work of raising pigs at his Shabbona farm and picking the best of the litter for show resulted in some champions.

“My best year was in 1958 when I had Grand Champion Gilt over all breeds at the Sandwich Fair,” explained Joe. For his champion award, he received a gold watch from Howard Kauffman of Waterman, sponsor of the award. At the time he was a junior at Shabbona High School and had been showing at fairs for six years.

“You could only win the gold watch one time,” recalled Joe. So when he repeated his championship win the next year (Gilt, Boar and Barrows) he didn’t get another gold watch, but just the purple ribbons.

Joe typically showed at the 4-H Fair, being a member of the Chief Shabbona 4-H Club; at the FFA Fair, as a member of the Shabbona FFA Chapter; at the Sandwich Fair, Illinois State Fair, the International in Chicago, and the National Hampshire Show.

In 1967, Joe earned Senior Champion with his two-year-old sow at the State Fair in Springfield. At the National Barrow Show in Minneapolis he won Champion Heavyweight Barrow in overall breeds and Champion Carcass.

“It’s a little luck and a lot of hard work,” said Joe about showing pigs. Beyond aiming for the trophies and purple ribbons, “We’ve made many friends in our years of showing. I lay in bed some nights thinking about all the guys I used to show with.”

Joe followed in his father’s footsteps showing hogs. His father, Garnet, showed registered Hampshire hogs during his youth, 1923 to 1932. Then it was Joe’s turn showing in his younger years from 1952 to 1961 in the junior shows and in the open show at the Sandwich Fair until 2000.

The Suddeth’s raised mainly Hampshire hogs but later added Durocs, Yorkshires and Chester Whites to the mix of purebreds. Joe’s sons, Joey and Neil, showed both purebred and crossbred pigs.

As times changed in the show circuit, the Suddeths continued to choose hogs raised on their farm versus buying show pigs. Now Joe’s youngest grandson Logan, the fourth generation, selects pigs from their farm stock to show at the local fairs.

“Watching the grandkids show is what it’s all about today,” said the 79-year-old grandpa. All three of his grandsons have shown pigs – Cody, Austin and Logan.

Joe’s job now is to open gates for his grandson in order to move pigs from the pens to the show arena. Joe’s wife, Nancy, keeps track of the show results. “We look forward to the shows; it’s the highlight of our year,” said Nancy.

The Suddeth’s spend much of their summer going to fairs, just to watch the shows. Otherwise they focus on raising pigs on their farm – the same way Joe’s dad did nearly 90 years ago.