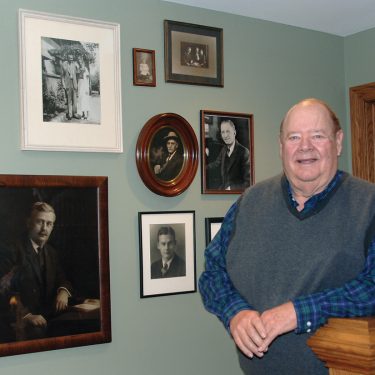 John Ward cares about his community – from his rural neighborhood to the city of Sycamore. Because he cares, he’s always giving back.

“Anything you do you get back two-fold,” said John. “Everyone benefits if you work together.”

The community-minded farmer prides himself in being a good farm neighbor and city friend. His wife Betsy calls him the “Country Mayor” because he’s always helping someone and doing all he can for Sycamore. “He has a heart of gold,” she said.

But what people don’t know about John is he’s a “behind-the-scenes” man, explained Betsy. If there’s a problem or he’s got an idea, John prefers to visit personally with key people and community leaders to accomplish common goals. 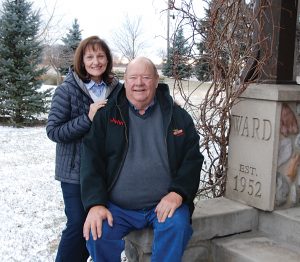 Betsy and John Ward reside at Old Elm Farms in the home John’s parents built in 1952. A marker by their front porch honors the family heritage.

A Man of Community Service

Community service seems to come naturally for John. He says that trait was instilled in him at a young age, by his father, James Dayton “Dayt” Ward. Dayt chaired the County Board and served on the board for 22 years. His father owned the Fargo Hotel, from the ’40s to the ‘60s, and was very active in the business community. While working at the hotel during his youth, John also interfaced with local businessmen, some who were members of the Sycamore Town Club.

“Back in those days, prominent Sycamore businessmen would meet at the hotel to play poker and discuss city matters,” said John. “There was a lot of business that was done at those meetings!”

John graduated from Sycamore High School and then attended the University of Wisconsin-Madison to complete an agriculture short course. He worked for DEKALB Ag selling seed corn in Wisconsin for a brief time and then returned to Sycamore. John worked at NB&T bank and the Fargo Hotel for a couple of years until he took over the family farm in 1971.

While farming and raising a family, John served his community. One of the most rewarding roles was being on the Sycamore School Board for a decade and serving as president for three years. “Those were some tough times,” said John. During his tenure he was involved with hiring a new superintendent, passing a building referendum, cutting staff, and a teacher’s strike. “It was hard, but we managed to keep it civil.”

When their children, Steve and Stephanie, were in school he and Betsy did the whole gamut of being involved in organizations like PTO, Sports Boosters, Ag Advisory Council, and supported the kids’ various sports.

John served on the Kishwaukee Health Foundation Board during the time when the new hospital was built. He helped seek donations, exceeding their team and overall goals. “That was very rewarding,” he said.

He was a member of the Oak Crest Board of Directors when they built the new advanced care wing. His mother had lived at Oak Crest Retirement Center previously.

Currently, John is an elected trustee for Sycamore Township and is president of the Sycamore Rural Fire Protection District. He also is secretary/treasurer of the DeKalb County Farm Bureau Foundation for Agriculture. 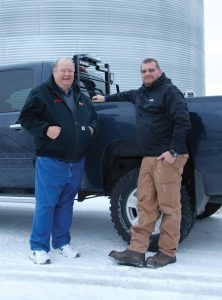 John and Steve Ward farm together raising corn, soybeans, wheat, and hogs at their Old Elm and Dayton Farms in rural Sycamore.

John Ward was recently presented with Sycamore’s Outstanding Citizen Award named after Clifford Danielson. This award is given annually by the Chamber of Commerce to an individual who has demonstrated exemplary leadership, community service, and involvement in the Sycamore community.

“I am very humbled to receive this award,” said John in his acceptance remarks at the Chamber’s Annual Meeting. “Mr. D. was an outstanding individual dedicated to Sycamore and its well-being.” John said he felt privileged to have known Cliff Danielson, president of NB&T.

John was only nine years old when he first met Mr. D. John had asked his father if he could buy two head of cattle and his father said “no” but sent him to the bank to see Mr. D. for a loan. Twelve years later, John would return to the bank to work under Mr. D’s direction before deciding to farm.

John is among a prestigious group of outstanding citizens who have received the Clifford Danielson award since 1987. He is the 31st recipient of the award.

His brother, Jim, presented the award to John at the Chamber meeting in the presence of the Ward family and 350 community persons.

Along with John’s commendable community service, he has employed many students to work on his farm. The Wards hire high school students to do assorted jobs like feed pigs, pitch manure, pick up rocks, and help with planting and harvest.

John’s wife Betsy said, “So many have come back to thank John for all they have learned and for supporting them.”

“I have enjoyed working with students and they have done well,” said John. “Three of them now have their own businesses in Sycamore.” Another student that worked on his farm is now with the CIA, he thinks, and talks to him each year during Pumpkin Fest. Touched by this long-time friendship, John said the former farm employee always ends the conversation with, “Thank you Mr. Ward.” 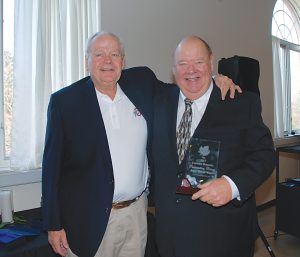 Brothers Jim and John Ward embrace after Jim presented the Clifford Danielson award to John at the Chamber meeting.

Their Dayton Farm is one of the oldest farms in DeKalb County. John Ward’s great-grandparents homesteaded here in 1836 building a log cabin and barn in 1837. The big red barn still stands today boasting a strong farm heritage with its Dayton Farm name prominently painted above the barn door.

John, the fifth generation, and his son Steve, the sixth generation, farm together today. They raise hogs, corn, soybeans and wheat, operating 3,000 acres in Sycamore and DeKalb. Steve’s son, Dayton is the seventh generation – he currently raises chickens!

John strives to be a good neighbor to his city friends who live a half-mile away in a rural subdivision. A farm field separates their farmstead from the subdivision of houses. Neighbors notify him of special occasions and parties so he respects their outdoor activities and waits to apply manure another day to avoid odor issues. He follows the best management practices for livestock farms but finds doing more is just neighborly.

The grain and livestock farmer also keeps a watchful eye on his rural neighbors, says Betsy, as part of being the “Country Mayor.”

What makes John “happy” is his family. John calls Betsy, his wife of 52 years, his “rock.” Their son Steve and his wife Jolene have two children: Dayton, a high school junior, and Sarah, in eighth grade. Daughter Stephanie Palmer is an assistant superintendent and resides in LaGrange with her son, Dalton, a high school junior. Stephanie’s eldest son, Joran, is serving in the Army.

“I have so much pride in my family, in my farm, and in my community,” said John. “Giving back to my community is as important as farming.” 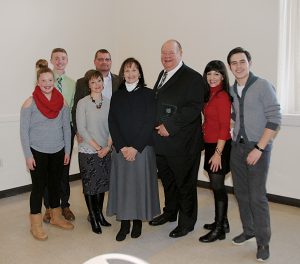 The Ward Family attended the Chamber meeting in support of John’s recognition – (From left) Sarah, Dayton, Jolene, and Steve; Betsy and John; Stephanie and Dalton. Missing is Stephanie’s son, Joran.

“John is passionate about his family, farm and community. He is a leader, a communicator, a spokesperson and more importantly an ambassador for Sycamore – a city that has always been connected to his family.” 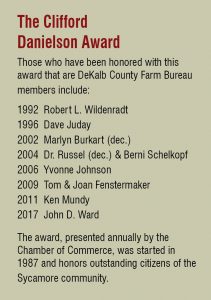