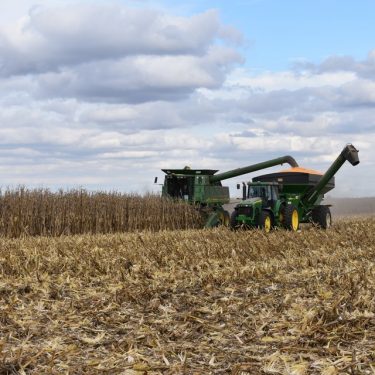 Weather is a key factor with corn and soybean production and harvest.

As farmers know, weather is always a factor when it comes to growing and harvesting crops.
In a recap of this year’s harvest in DeKalb County, farmers got an early start because the crops had reached full maturity and grain moisture levels were ideal. Also, field conditions were dry so many farmers started harvest in mid-September.

Many farmers got a good three weeks of harvest done before the rains came in early October and again in late October. Combines sat idle for a few weeks in October due to rainfall and wet field conditions.

Another weather-related factor this year was wind storms, which occurred in August, knocking down some corn. Farmers refer to this as “down” corn. In order to pick up the down corn, some added a reel to their combine head to help feed the flattened corn stalks into the machine.

The weather also prompted the return of some soybeans in fields. With the beans being so dry, they were prone to shattering out of the pods as they were being combined. Some of the soybean seeds remained in the fields and coupled with warmer weather and some rain, it caused the seeds to germinate. Thus, some fields looked like a second crop of beans was growing.

These harvest scenes capture some of what was going on during the 2021 harvest.