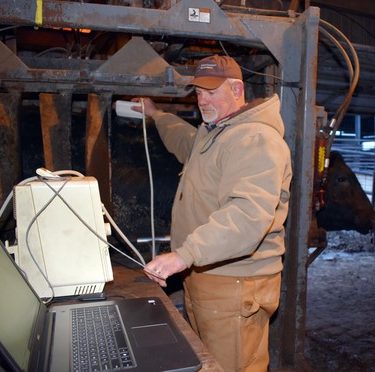 Robert “Bert” Hueber knows a good ribeye when he sees one.

As a certified ultrasound technician Bert evaluates ribeyes regularly for Beef Performance Technology. He uses the ultrasound technology as a tool to aid cattle feeders in producing a high quality product for consumers.

Bert ultrasounds thousands of beef cattle raised in local feedlots, which gives him a good look at the live animal’s ribeye and the carcass potential.

“It’s a marketing tool where you get cattle sold at optimum harvest points based on weight, back fat thickness and the marbling score,” said Bert. “Backfat correlates to yield grade and marbling equates to quality grade.”

The ultrasound technology gives farmers an edge on quality control resulting in a more consistent product in the meat counter.

Bert Hueber understands all there is to raising beef cattle. He’s done it most of his life. The Malta farm boy grew up raising cattle with his father, Roger. Then after he earned a college degree in agriculture he returned to his rural roots to work for cattle feeders. 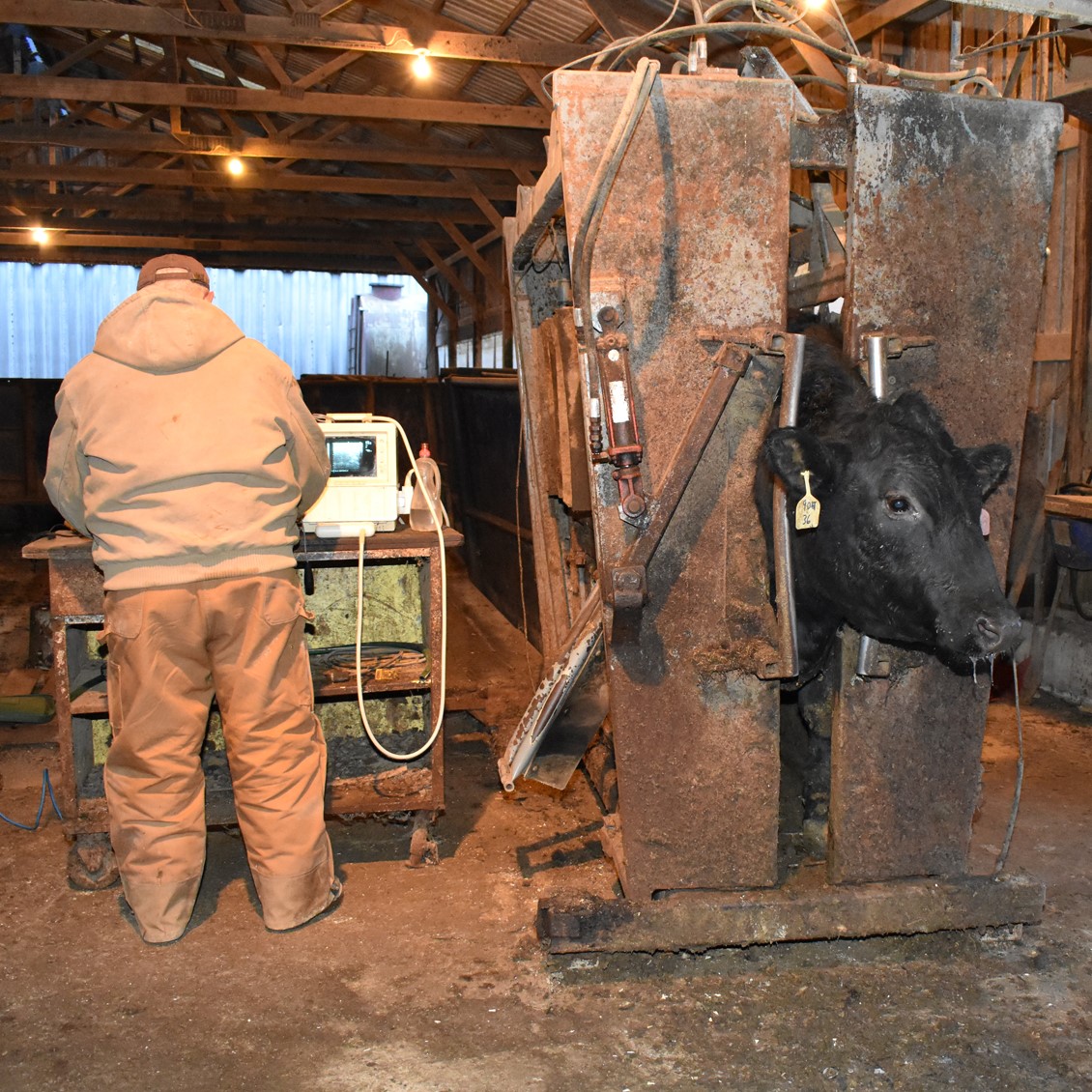 Bert Hueber ultrasounds a steer at J. Willrett Farms, a useful tool for obtaining valuable carcass information. The squeeze chute keeps the animal contained and calm during the ultrasound.

“I’ve always enjoyed the livestock side of agriculture – on our farm and other farms,” said Bert.

For almost three decades now he has worked at J. Willrett Farms in rural Malta. From the onset he worked closely in the feedlot with Jim and now works with Jim’s son, Jamie.

“I love working with cattle,’ stated Bert. He oversees the day-to-day care of the feedlot cattle “reading bunks” to assess feed needs and “walking pens” to determine that all of the bovines are healthy.

Twenty-three years ago Bert expressed interest in ultrasounding cattle in conversations with the Willretts. The Willretts had first learned about the ultrasound technology through their nutritionist who hailed from Nebraska. They partnered with Larson Farms of Maple Park to acquire the ultrasound equipment and form the company Beef Performance Technology.

As cattle farmers, they recognized the value in the ultrasound technology that would be used in their feedlots and on other cattle farms. The technology and software was purchased from developer John Brethour with Kansas State University who started the Cattle Performance Evaluation Company (CPEC).

In 1996 Beef Performance Technology established a contract with CPEC to be exclusive to the state of Illinois with their ultrasound business. They were also the first ultrasound business to start up east of the Mississippi River.

Bert Hueber was trained and certified as an ultrasound technician by Professor Brethour. The equipment and software provided all the components for live carcass measurements and evaluations.

“When I first started I was scared of the technology because I didn’t have the computer experience,” stated Bert. “But it came in time with usage.”

His ultrasound equipment consists of a scanning probe, the ultrasound machine for originating the live carcass image, and a laptop computer for recording the image and data. 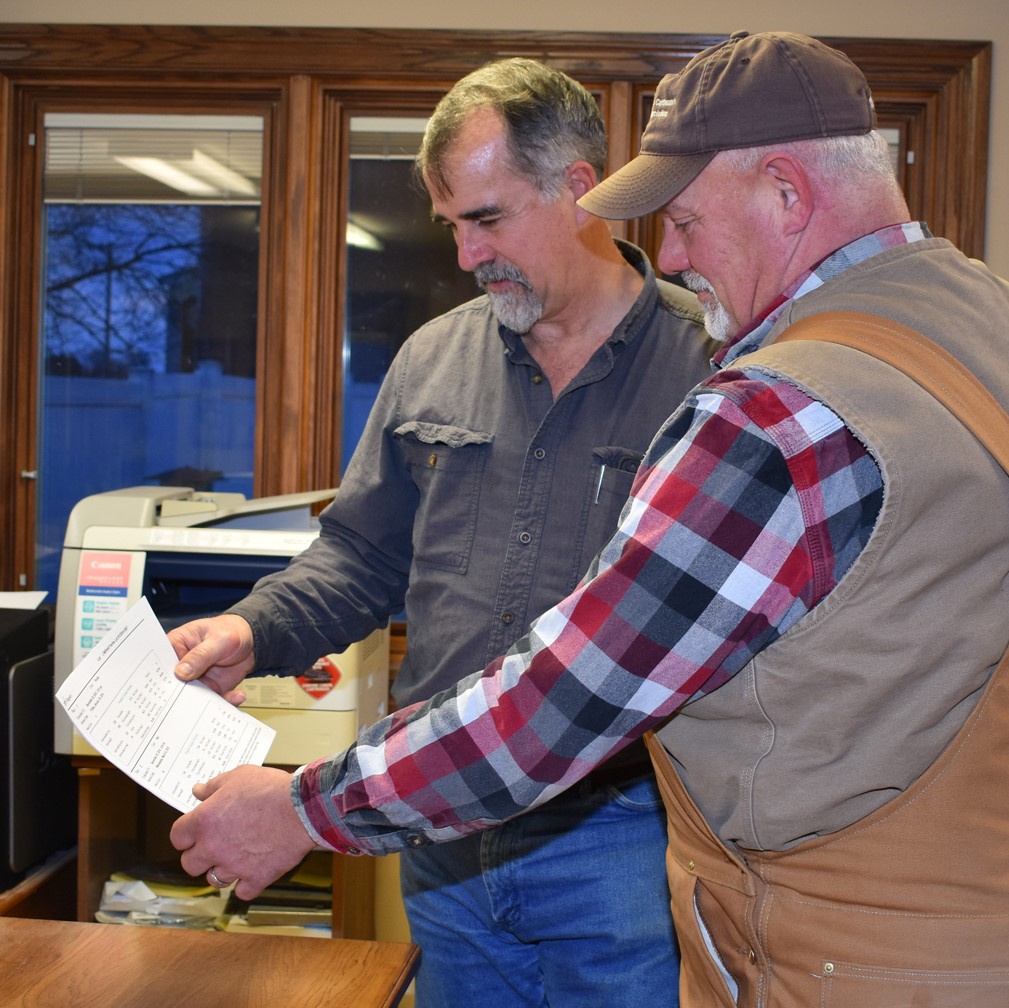 Jamie Willrett and Bert Hueber review the ultrasound data for each animal and for each pen of beef steers to assess the overall herd performance.

With all of his gear, he was on the road regularly as he traveled from central Nebraska to central Ohio to ultrasound cattle. After a few years, Bert became one of the co-owners of Beef Performance Technology with the Willrett and Larson Farms.

Eventually, he remained in DeKalb County to concentrate on local feedlots. Today he provides ultrasound services for four area feedlots.

He ultrasounds about 20,000 feedlot cattle each year. The cattle he ultrasounds are yearlings (1-1.5 years old) and are typically scanned a couple of months before reaching market weight. The measurements help determine how many more days on feed for each animal to reach an average weight of 1,400 pounds and achieve the best quality carcass attainable.

Once Bert has scanned a pen of cattle he provides the producer with a printout which shows average weight, backfat thickness and marbling score for the pen and for each animal. Also computed are the finish weight and projections for yield grades and quality grades of the carcass. 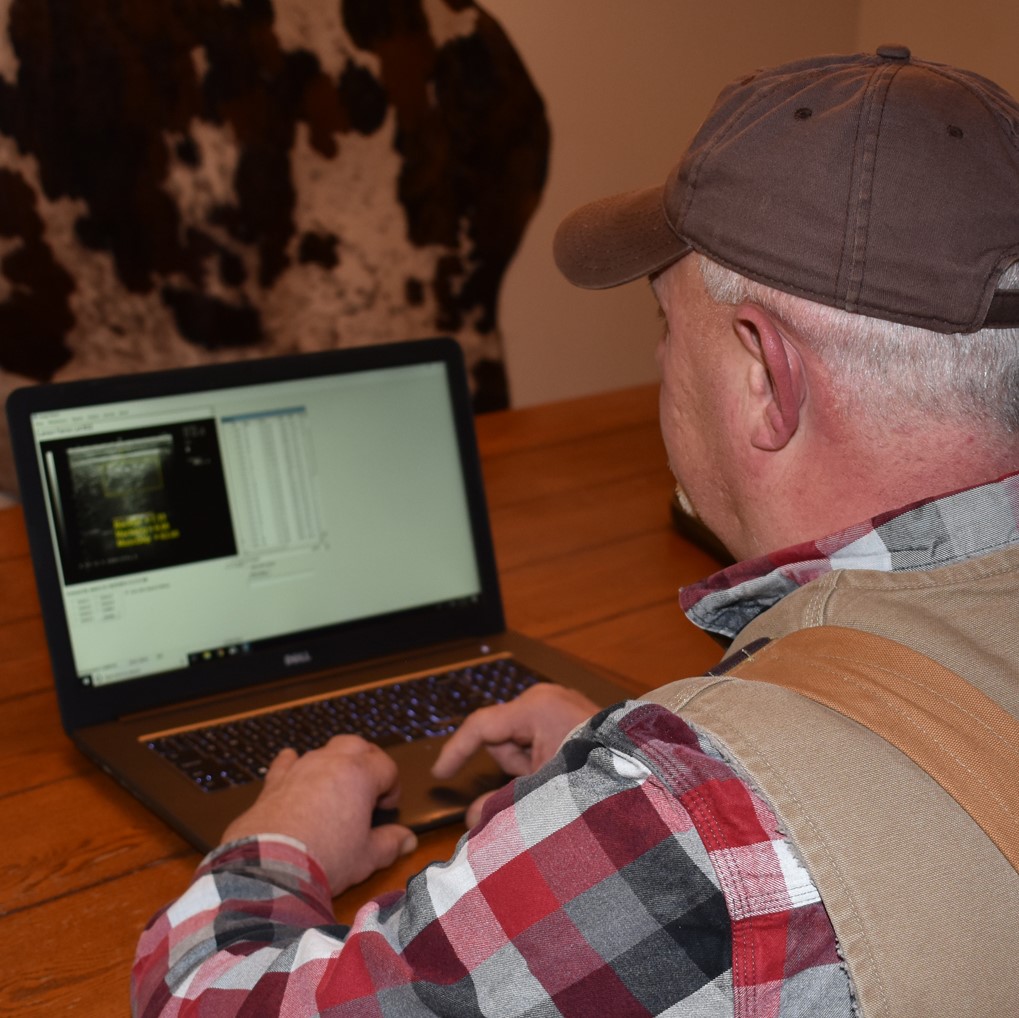 As an ultrasound technician for Beef Performance Technology, Bert Hueber analyzes ultrasound images and data and provides a printout for each beef farm.

“Packers want cattle that will be choice or prime,” explained Bert. When harvested, the cattle are graded by USDA inspectors. “The accuracy of live cattle ultrasound projections are 80-85% in line with USDA inspected carcass data.”

“Ultrasound helps with sending more consistent animals to the plant,” he continued. “The key is to avoid having cattle that are too big or too fat or we will get discounted on price.”

Jamie Willrett finds value in the ultrasound technology which in turn puts profit in his pocket. “It provides about a $15 per animal benefit,” he said. Jamie reviews the ultrasound data to determine his herd’s performance.

Bert says that Beef Performance Technology has been a worthwhile venture. “The business gives me the ability to be involved in cutting-edge ultrasound technology and also work in the cattle business.” 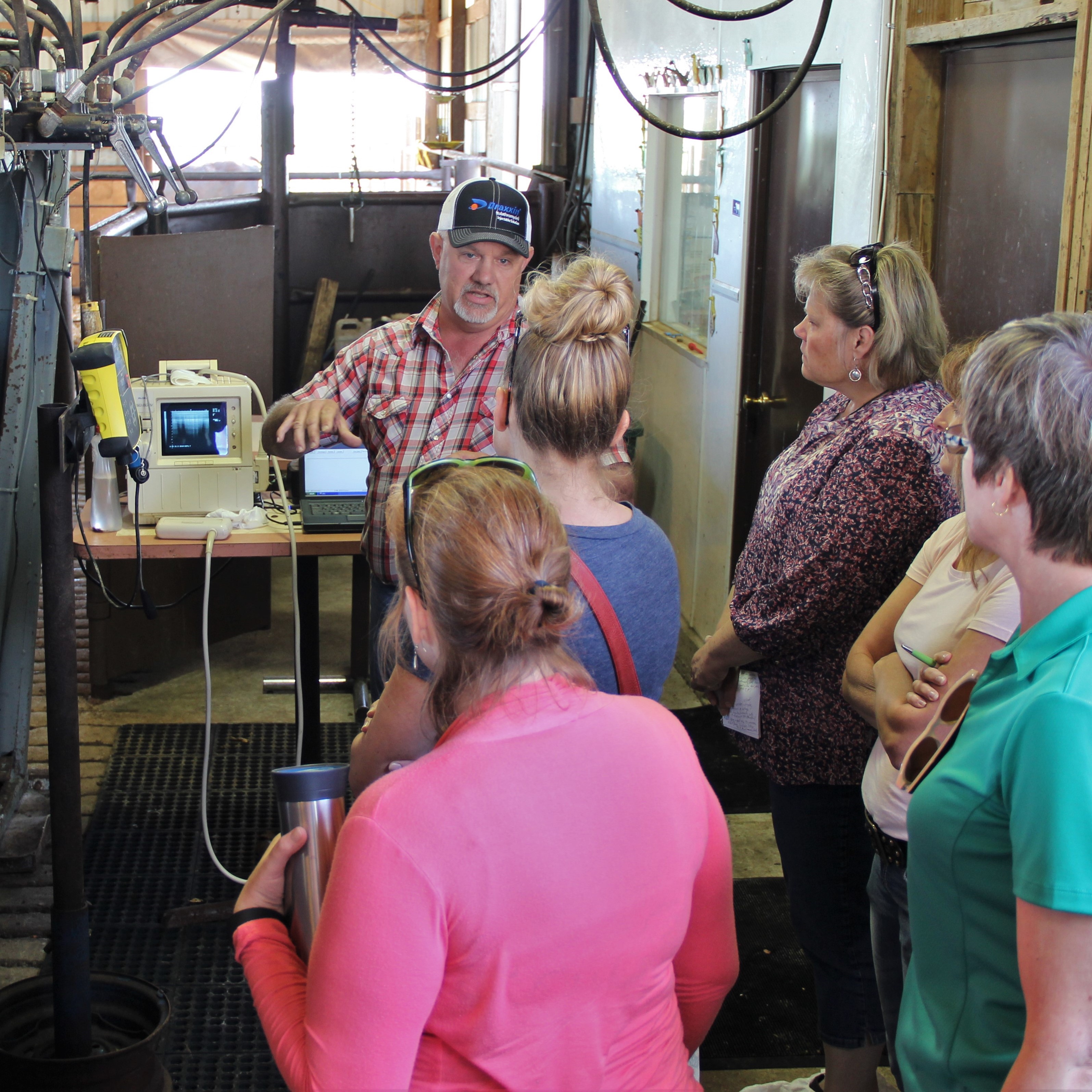 Helping others understand this new wave of technology, Bert Hueber explains ultrasounding beef to teachers. These teachers toured a beef farm and observed the technology during the Summer Ag Institute.

Because of his enthusiasm for the beef industry, Bert Hueber takes time to help others understand the cattle business.

The cattle farmer previously served as president of the DeKalb-Kane Cattlemen’s Association and participated in several local beef promotional programs.

Bert is passionate about so many things in life but his ultimate favorites are: family, his Harley motorcycle, and of course BEEF!