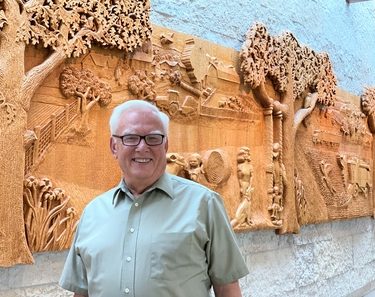 It’s been 25 years since The Seasons of Agriculture mural was completed and installed in the new DeKalb County Farm Bureau Center for Agriculture.

Master Carver Joe Dillett remembers it like it was yesterday.

“I felt honored to do it,” said Joe. “It was, and still is, my largest hand carved piece.”

You can’t miss his beautifully carved masterpiece based on it being the focal artwork at the main entrance of the Farm Bureau Building and, mind you, it’s enormous size!

The butternut relief carving measures 32 feet 5 inches by 6 feet 10 inches, covering most of the curved stone wall in the front lobby. It is handcrafted from 1,157 feet of laminated butternut and weighs 780 pounds.

Joe recalls he was one of eight contenders for the artwork being considered by Farm Bureau. He, along with wood craftsman Ken Burtch of Hardwood Connection, made a business pitch to a committee of farmers which was accepted. They were commissioned by the farm organization to create the mural for the new building.

“It was a big project for our small shop,” said Ken, who sourced the butternut wood and prepared it for Joe to carve. Then, his shop was located in DeKalb and much smaller than the millwork shop he built in Sycamore a year after the mural was completed.

Ken called the project “challenging” but embraced it, working closely with Joe.
Back then, in the mid-1990s, Joe had been creating hand carved fireplace mantels and carvings such as “The Lord’s Supper” for local churches, plus smaller pieces for customers. He had also made some patterns for Ertl toys and McDonalds. His wood carving business was evolving while he was an engineer at CTS Corporation in Sandwich.

Joe retired from his engineering job to go full-time with his woodworking business. He built a new shop, The Carving Shop, west of Somonauk as his work base.

With the Farm Bureau mural at the forefront of his projects, Joe went to work on it in the fall of 1995. Three ideas were presented to him: DeKalb County Feeds The World; The Past, Present and Future of Farming; and The Seasons of DeKalb County Agriculture. “Seasons of Agriculture won out,” said Joe.

The Seasons of Agriculture carving would be based around seasonal farm activity and Farm Bureau’s motto of serving farm, family and community.

It took two months of preparation work. He first sketched a life-size drawing of the mural and presented it for a group of farmers to review. Local farmers provided Joe with input and technical advice in the development of The Seasons of DeKalb County Agriculture.

“The farmers noticed from the sketch that there were no end rows in the fields and the fence was upside down so the pigs would get out of the pen,” mentioned Joe. “They also noted the sprayer booms weren’t long enough and the grain bin leg needed some height adjustment. Plus the treads were going the wrong direction on the tractor tires.”

“I learned a lot more about agriculture with this rendering,” noted Joe, who had worked on farms in his younger years.
When he was carving the mural, the 53-year-old was “in his peak” – with strong hands and legs, good eyesight and hearing. “It’s important as a carver for hearing and seeing how the chisel is cutting the wood,” Joe said.

At his Somonauk shop, people would stop by to see the progress. “The adrenaline was always flowing; it was an enthusiastic moment for me working on the Farm Bureau mural,” said Joe.

It took him six months from start to finish, amounting to 1,650 hours, to hand carve The Seasons of Agriculture mural. He did it with the assistance of the Hardwood Connection team of Ken and Barb Burtch and Dave Smith who helped finish and install it on July 31, 1996.

The mural was mounted on three stringers of wood atop cement blocks and surrounded by stone. There are 12 different wood pieces which form the mural to allow for expansion joints. Major expansion joints are behind the four trees.

“We had to account for eight inches from summer to winter for natural expansion of the wood,” explained Joe, “because the building isn’t climate-controlled. Summer expansion joints close based on high humidity while in the winter the joints open up due to dry heat.”

The mural showcases farming practices complete with farm machinery; landscapes featuring farmsteads with an abundance of grain and livestock; traditional community settings with churches and schools; bountiful oak and maple trees that frame each season; as well as the county’s heritage with the barbed wire and DEKALB seed corn’s winged ear.

The farm family is one of the focal points in the mural surrounded by rural activity. “It shows that the family unit is still the strongest in farming,” said Joe.

At the top of the mural is DeKalb County protruding out of the state of Illinois. Also you will see a barn with the date of 1912 carved into it. That’s the year in which the DeKalb County Farm Bureau was formed making it the first Farm Bureau to organize in the state.

Joe’s favorite part of the mural was carving the textures, adding three dimensional looks, such as the corn stalks and round bales. And finally, admiring the completed mural, as so many others do, at the Farm Bureau Building.

What would he change if he were to carve the mural today? “I would add sheep, a few cats and chickens,” he responded, noting some farms raise a variety of small animals.

The mural resulted in another job for Joe, one with the American Farm Bureau. He created a large round carved mural for them in 2003, which hangs in their headquarter office in Washington, D.C.

Today Joe is retired, sort of. He continues to carve out of his shop now located on his son’s farm in rural Genoa. He does mostly religious carvings, aside from a variety of fun projects for his grandchildren. And he also is a stone carver – making statues and sculptures out of marble and limestone, including tombstones and church altars.

The 78-year-old artist, who recently moved to Genoa, likes some variety so he also creates greeting cards with his drawings to benefit the local food pantry.

The Master Carver has taught others to learn his love of carving through apprenticeships and personal relationships. He teaches wounded veterans through the 21st Century Heroes program at Camp Pendleton. Currently, he is teaching his priest and his brother the art of carving.

His carvings can be found all over the world. His trademark signature is JD or Joe Dillett (hint: you can spot it in the bottom center of the Farm Bureau mural).

“I’m attached to a carving until it leaves,” said Joe. “Then I’m mad at it for leaving.” Obviously he is passionate about his many masterpieces, especially The Seasons of Agriculture mural.

About the Seasons of Agriculture Mural

The Seasons of Agriculture wooden relief mural was completed July 31, 1996 and installed at the DeKalb County Farm Bureau Center for Agriculture. It measures 32 ft. 5 in. by 6 ft. 10 in. and is handcrafted from 1,157 feet of laminated butternut wood. This unique sculpture weighs 780 pounds.

Master Carver Joe Dillett hand carved the piece from his shop in Somonauk. It is the largest wood carving he has created. It took Joe 1,650 hours or about 6 months to complete.

The Hardwood Connection team of Ken and Barb Burtch and Dave Smith sourced and finished the wood in their DeKalb millwork shop, and helped install the mural at Farm Bureau.

The Seasons of DeKalb County Agriculture portrays modern-day agriculture throughout the changing seasons. The mural showcases farming practices from planting to harvest complete with farm machinery; landscapes featuring today’s farmsteads with an abundance of grain and livestock; traditional community settings with churches and schools; as well as the county’s heritage with barbed wire and the winged ear. The prominence of the farm family is captured in the middle of the mural.

The mural is located in the main entrance of the building, on the stone wall in the DeKalb County Farm Bureau Lobby.

The DeKalb County History Center’s latest exhibit, “History of DeKalb County in 100 Objects” includes 100 objects throughout the county that tell a story of its history.

To showcase some of the 100 objects, the History Center featured a social media bracket challenge to include one more additional item. Historical artifacts were featured on Facebook and Instagram allowing the public to vote on their favorites.

The Seasons of DeKalb County Agriculture mural defeated Waterman Hall, the Old Charley Memorial, the former DeKalb Post Office, and the Chief Shabbona Statue to earn its rightful place amongst the 100 artifacts.

You can visit the mural in the main entrance of the Farm Bureau Building or stop by the History Center to see how it’s included in the new exhibit.