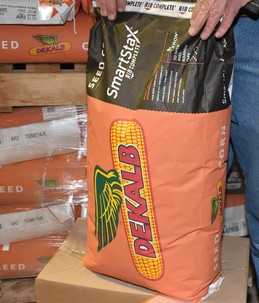 Farmers are having their seed delivered in preparation for spring planting.

There are so many seeds to choose from. So how do farmers decide which seeds to plant?

There are a lot of factors for farmers to consider when selecting seed. The price of seed and the return on their investment are important economic factors when deciding which seeds to buy and plant.

Deverell says the price of seed has come down slightly in the last few years, but still is one of the biggest input costs for farmers, averaging about $120 per acre or as much as $330 for a bag of seed corn. 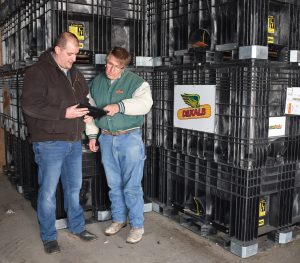 Some farmers grow genetically modified (GM) crops to withstand pest issues while others might grow non-GM varieties due to economic benefits.

Seed corn with as many as four genetically modified traits (to protect against insects, weeds) costs substantially more than seed corn with fewer traits or no biotechnology. So farmers have to consider the tradeoffs with the cost of seed and traits as well as managing the environmental benefits when growing corn.

Malta farmer Ed Arndt chooses different seed corn maturities to spread his crop risk. He picks some early maturing hybrids to harvest earlier in the fall as feed for his pigs and then utilizes the farmland to apply manure. Most of his seed selection though is with later maturities or 114 day-corn for optimal maturity.

Arndt plants all DEKALB seed, having an enduring family history with the company and maintaining a dealership for 42 years. He prefers DEKALB SmartStax® corn to protect his crops against pests and weeds. “The benefits of having all the traits have been huge,” said Ed, “especially for rootworm protection.”

Seed traits provide an additional risk management tool for farmers and improve the quality of grains. GM seeds have select traits so the plant can fight pests, ultimately reducing pesticide use. The first genetically modified trait produced in a corn seed was Bacillus thuringiensis (Bt), a soil bacterium used to protect against the European corn borer moth and larvae.

Since then several other insect traits have been introduced to protect plants against corn rootworm, corn earworm, Western corn cutworm, fall armyworm and black cutworm.

The sustainability of seed traits is dependent on the use of a refuge planted with traited corn. Refuge protects the biotechnology of other seeds. The main purpose of planting refuge seed is to maintain a population of insect pests that are not exposed to Bt proteins. Lack of exposure allows susceptible insects emerging from refuge to mate with any rare resistant insects that may emerge from the Bt crop. 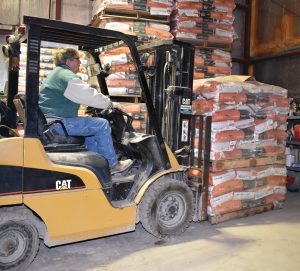 Ed Arndt is currently loading pallets of seed corn for delivery to his customers. He sells DEKALB seed to about 30 farm customers and also plants all DEKALB seed corn. Arndt spreads his risk by planting some early maturities and some later maturing corn.

Soil health and fertility factor into the seed selection mix as part of the agronomics of growing corn. Farmers will take into consideration different hybrids from different companies based on varied soil types and soil productivity.

Brian Deverell and Ed Arndt agree that there are many agronomic components to balance. After researching and analyzing hybrids, they concur that these are the qualities they are looking for in seed corn:

“Farmers want a seed corn that performs well and has good standability,” said Deverell. He said the stacked traits provide that assurance.

In evaluating seed, farmers look at their own yield data and data from field plots to help with their seed selection for the next crop year. Farmers also work with crop specialists, agronomists, and seed dealers in analyzing crop information and making agronomic decisions.