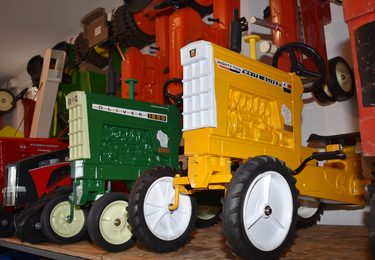 Three local famers share their passion for collecting toy tractors, as we approach the holiday season when young farm children get excited about receiving similar toys.

When Gene Reid was a young farm boy he had a pedal tractor. A yellow Minneapolis Moline model from the mid-1960s. He loved riding that tractor, which made him feel like he was a real farmer, just like his dad and grandpa.

But he didn’t have that pedal tractor for long because his grandpa accidentally ran over it with their farm tractor. That was the end of his small tractor… or so he thought.

Fifty-some years later Gene has quite the collection of pedal tractors. The Minneapolis Moline Model UDLX, a custom built pedal tractor, is one of his favorites and the most rare in his collection.

“I became interested in collecting toy tractors about 15 years ago,” said the Malta farmer. “I went to toy shows and started buying small farm tractors at first. Then my focus shifted to pedal tractors.”

His first pedal tractor he purchased was a New Holland four-wheel drive from Peabody’s implement dealer in Sterling for $300.

“I started slow. I bought one at a time,” said Gene. “When I got more serious,  I bought as many as six pedal tractors at a time. That’s how many will fit in my Explorer!”

With each purchase, Gene allowed his young nephew, Brandon, to test drive them in his farm shop in the early days of collecting. Then the pedal tractor was added to the collection hanging on the walls and on tables in his shop.

It wasn’t long before the collection had outgrown its space in the machine shop where Gene worked on his farm equipment. So he decided to transform a cattle shed into another collection center for his pedal tractors on his South Malta Road farmstead.

“I figured if you have a collection you should be able to enjoy it and see it,” said Gene. “And I want others to see the pedal tractors, too.” He invites his friends and neighbors to stop by and see his extensive collection.

Today his collection has grown to about 200 pedal tractors and implements.

The tractors represent just about all makes from traditional John Deere green and International Harvester red to Ford blue and Minneapolis Moline yellow. Plus, he’s got ones which are painted pink or purple for farm girls – his partner Dawn collects these. Gene also has special editions painted gold
or silver commemorating the tractor companies’ milestone anniversaries.

He finds the tractors at implement dealers, toy shows, auctions, garage sales, and in recent years on Facebook Marketplace and Craig’s List. In a typical year he would go to 12 toy shows throughout the Midwest. This year, due to the pandemic, he has gone to two shows.

“I’m always looking,” said Gene. “I’ve got two auctioneers that are on the lookout for me. The implements (wagons and plows) pulled by the tractors are harder to find.”

With his large collection, he has become more “selective” in his choices and avoids duplicates by checking his inventory list. The condition of the toys is also important in his buying decision – he buys fairly good ones, which don’t require any or much repair.

Gene has some custom built pedal tractors that resemble some of his favorite farm tractors and also pulling tractors, like a mini version of the ones that are used in tractor pulls. For the custom built tractors, he provides either a John Deere or IH aluminum frame base. His pulling tractor was specially made to include farm decals, a chrome seat, chrome rimmed wheels, a chrome stick shift, and specially made tractor weights.

To make some of the tractors even more memorable Gene and Dawn sign them to commemorate special occasions, like Christmas. A few of the Ertl made tractors are signed by the founder’s son, Joseph Ertl.

Gene, 61, plans on continuing to collect pedal tractors and adding to his collection. “They come out with new ones every year,” he said. He just has to remember to make a list, and check it twice!

“I figured if you have a collection you should be able to enjoy it and see it. And I want others to see the pedal tractors, too.”   Gene Reid

The global pandemic may have forced the cancellation of farm toy shows but it didn’t stop Vernon “Vern” Johnson from having his own.

A few months ago Vern figured he would hold a toy show at his Clare farmstead and still be in compliance with mitigation standards. He invited his friend Marvin Hawbaker to join him.

The two retired farmers put a large part of their toy tractor collection on display in Vern’s machine shed and opened their toy show up to other collectors over two weekends.

“We decided to do something, since we couldn’t go to other shows,” said Vern. “So we had our own show.”

They promoted their show on Facebook, took out a print ad in the local newspaper, and put up some road signs to welcome buyers.

Overall, the two farmers were pleased with about 120 coming to their first toy show and having the opportunity to sell some of their collectibles at the Old State Road farmstead.

Vern typically goes to several toy shows each year where he brings part of his collection to sell and also purchase more toys.

“At shows, they have stuff and I have stuff – to buy and sell,” he said. “Having done this for so many years I know the value and usually get the price, but then turnaround and will buy more.”

Collecting toy tractors has been a hobby of Vern’s for the past 40 years.

His interest in toy tractors started when he was a young farm boy. He still has those toys – Case models DC, 400, 830 and 930 – and for sentimental reasons he won’t be parting with them anytime soon.

Some of his favorites in his collection resemble the tractors he started farming with – a Case DC and a McCormick Farmall MD – both 1/16 scale models.

“What I like about collecting is the people you meet and the friends you make,” said Vern. “I enjoy the conversations we have.”

While the toys shows are his favorite venue, Vern also buys and sells on eBay, Facebook and Craig’s List. He started online sales about five years ago.

Collecting toy tractors is an extension of his love for agriculture. Vern, 76, has been a grain and livestock farmer his entire life.

Besides collecting toy tractors and other toys, he refurbishes and repairs them. Vern will buy whole collections and then purchase parts for the collection. He likes making a toy new again or improving it with added features.

Vern has grown his collection to 500 toys which are well displayed in their farmhouse. His wife, Jane, supports his hobby even though she sometimes says, “You’re not buying another one are you?”

Other family members who also support Vern’s interest are his son, Matthew, who helps with setup for the toy shows, and great-nephew, Don Weseman, who has an extensive collection of farm toys.

Vern looks forward to next year when “things return to normal” and he can get back to his routine of going to toy shows again.

“We decided to do something, since we couldn’t go to other shows. So we had our own show.”   Vernon Johnson

Marvin “Marv” Hawbaker began his hobby of collecting farm toys in the mid-1980s.

He credits fellow collector and farm friend Vernon Johnson for getting him started. “Vern stopped by to sell seed corn and mentioned he was going to a toy show,” said Marv. “So my wife and I went to our first toy show in Ashton, where Vern was selling some of his collection.”

There Marv purchased a set of 1/64 scale Ford farm toys including a tractor, plow, wagon and spreader. “I paid $10 and I caught the bug (to collect farm toys),” he said.

“It’s a good hobby. It’s a decent, clean hobby. And it keeps me out of trouble,” Marv chuckles.

Marv was instantly attracted to the hobby as a farmer who drove the real tractors and admired the small toy tractors. He continued to go to toy shows and build his collection.

Once his collection was large enough he became an exhibitor and sold some of his collection at in-state shows in Polo, Marengo and Mendota and also Juda, Wisconsin.

Some of his toy tractor favorites are International Harvesters (M, F20) similar to the ones which his dad farmed with. Another one is the IH 1206, which he bought from Vern. “It was the greatest tractor in the late 1960s – a monster at that time,” explained Marv, who drove the IH 1206 while farming.

His favorite toys have sentimental value and will remain on the shelf among his well-organized collection of 800 farm toys in their Kirkland home.

“I have my hobby of collecting farm toys and my wife, Arlene, has her hobby of making homemade cards,” stated Marv. “She’s supportive of my hobby as I am of hers.”

The retired farmer recently paired up with his farm friend Vern to have their own toy show, since others were cancelled on account of the pandemic. Marv took part of his collection to Vern’s farmstead near Clare to sell. “Since everything was cancelled we thought, why not have our own show,” said Marv.

The two were recently featured in the Toy Farmer magazine for taking the initiative to hold their own toy show.

“The best part about collecting farm toys is the comradery among collectors,” says Marv. “I also like seeing kids get excited about the toys, too. A kid’s smile is worth a million bucks!”

But Marv makes it perfectly clear that “no one plays with his toys” which are collectibles and “off limits” in order to maintain their value.

The 75-year-old’s collection not only contains toy tractors but also semi-trucks, pickups, construction equipment, Tootsie toys, and Matchbox cars. “I collect what I like and enjoy it,” said Marv.

“It’s a good hobby. It’s a decent, clean hobby. And it keeps me out of trouble.” Marvin Hawbaker