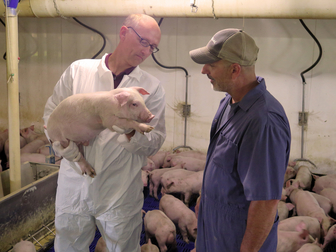 Following in his father’s footsteps, a young Steve Feuerbach tagged along with his dad on farm calls. With each call his appreciation grew for livestock and that’s when he decided to become a veterinarian, just like his dad.

His father was a veterinarian for over 50 years in the Feuerbach’s hometown of Preston in east central Iowa. Aside from the veterinary practice, their family raised hogs and cattle and row crops. Steve, the youngest of five brothers, helped with the farming and veterinary work. 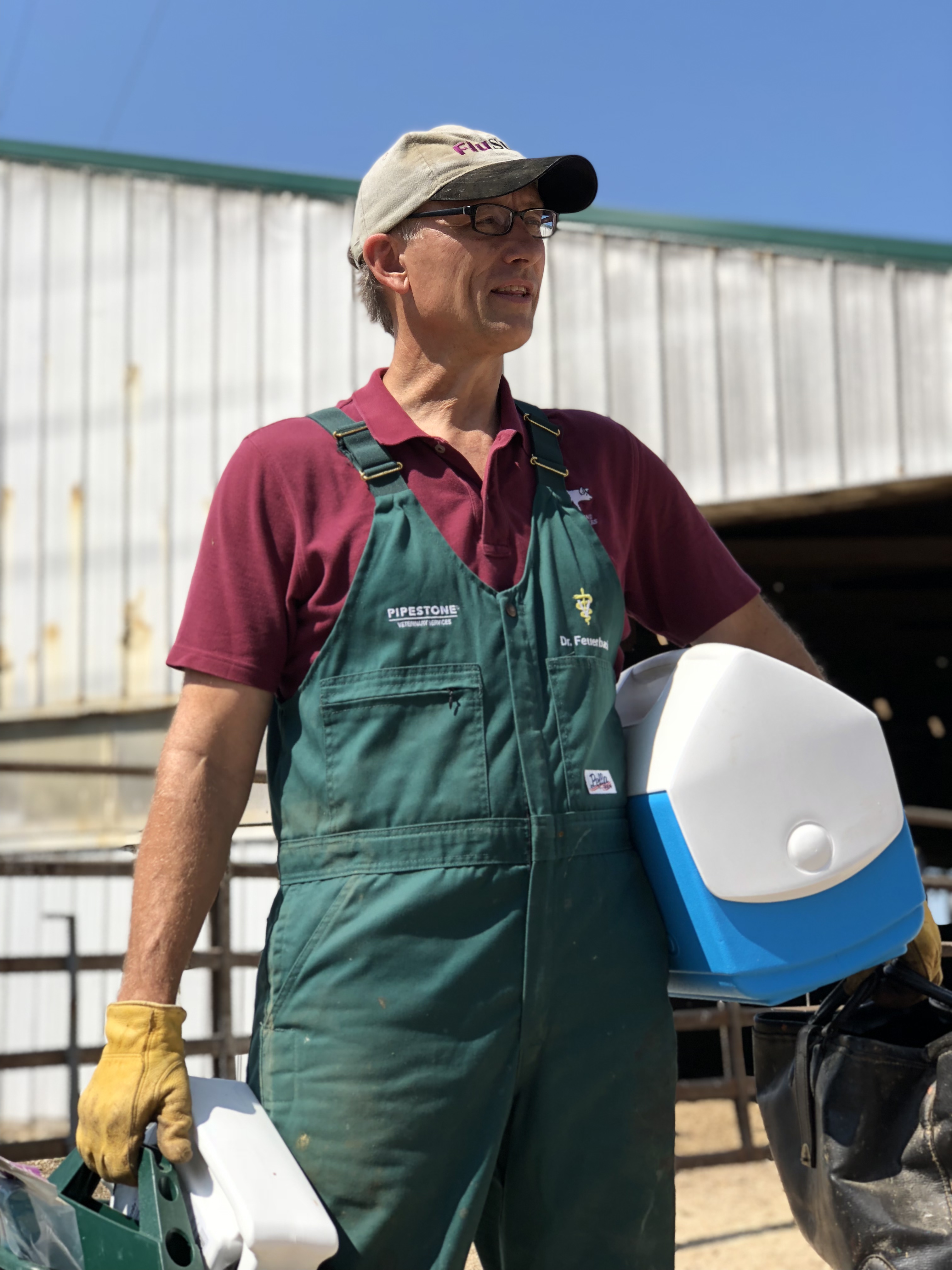 “It’s what I did then,” said Steve. It made his college path that much easier choosing Iowa State for both his undergraduate studies and veterinary school. After attaining his Doctor of Veterinary Medicine in 1991, he was hired as a large animal veterinarian for Bethany Animal Hospital in Sycamore.

“It’s a great profession,” stated Dr. Steve, now in his 28th year as a veterinarian.

In his early days of veterinary medicine, he made farm calls to several cattle feedlots and swine farms in the area. Now he concentrates on mostly sow centers and just a few cattle feedlots based on consolidation of livestock farms.

Two years ago the Pipestone System, with headquarters in Minnesota, purchased Bethany Swine Health Services, a division of Bethany Animal Hospital. Bethany has been operated by the Schelkopf family for more than 40 years. 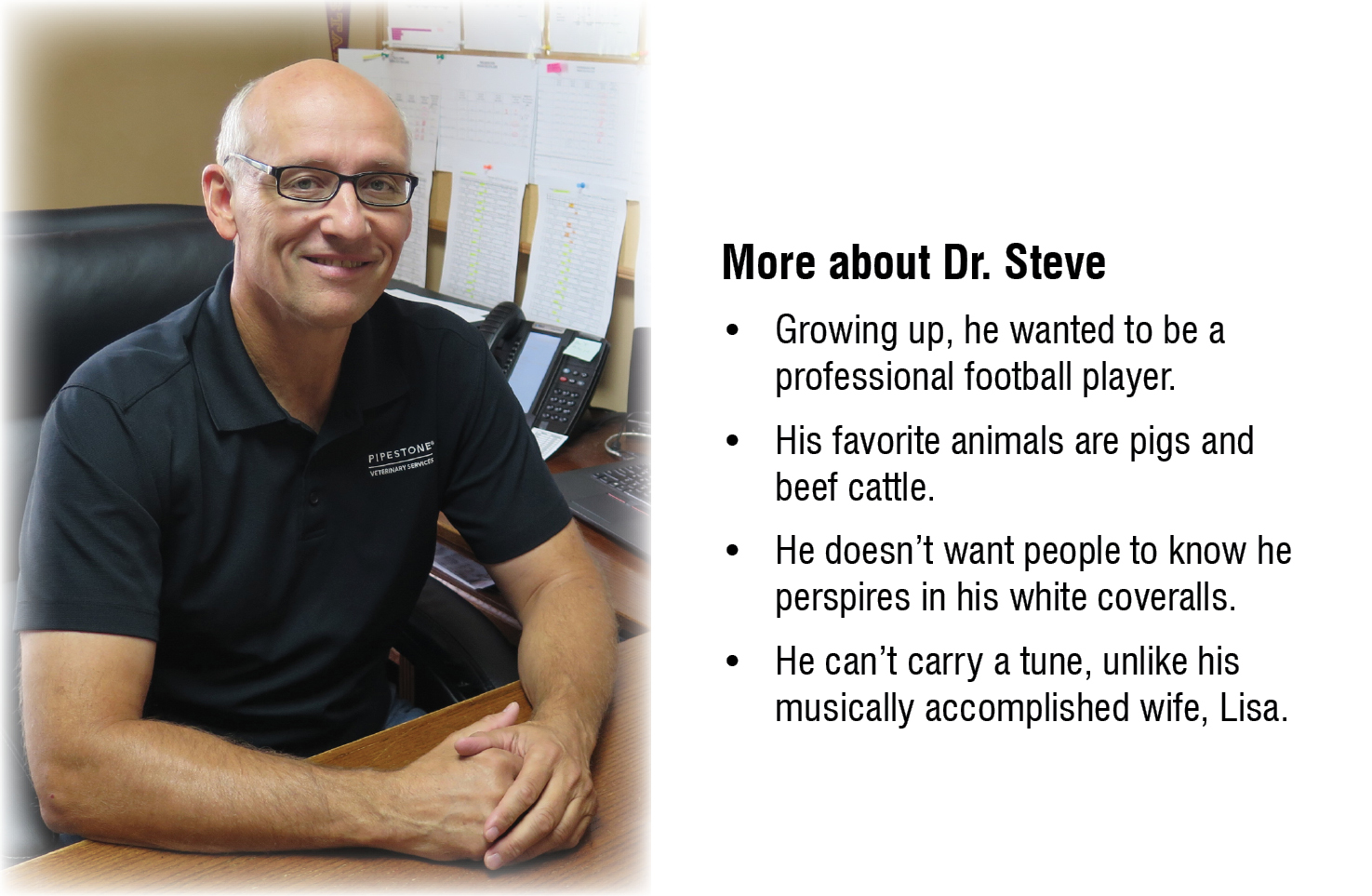 “My job is to focus on the primary health and welfare of animals,” he explained. “I also work closely with producers in evaluating production data and help them to be more efficient.”

The thing he likes best about being a vet: “My clients and the livestock.” The worst part: “Not being able to do enough for animals and dealing with health care challenges (diseases, pneumonia, shipping fever, etc.).

Working for a large corporation like Pipestone has its advantages, notes the 55-year-old DVM. “They have their very own research division for animal trials and tests. And have protocols in place to keep highly contagious diseases out of our livestock farms. Biosecurity is a necessity on all farms today.”

Outside of his veterinary work, Dr. Steve has always enjoyed sports. For years he played basketball in community leagues, with his 6’2” height advantage. Now he and his wife, Lisa, enjoy watching their five athletic children play sports.

Lynda Gould is part of a growing trend of woman veterinarians. More than 60% of veterinarians in the U.S. are women, according to the American Veterinary Medical Association. 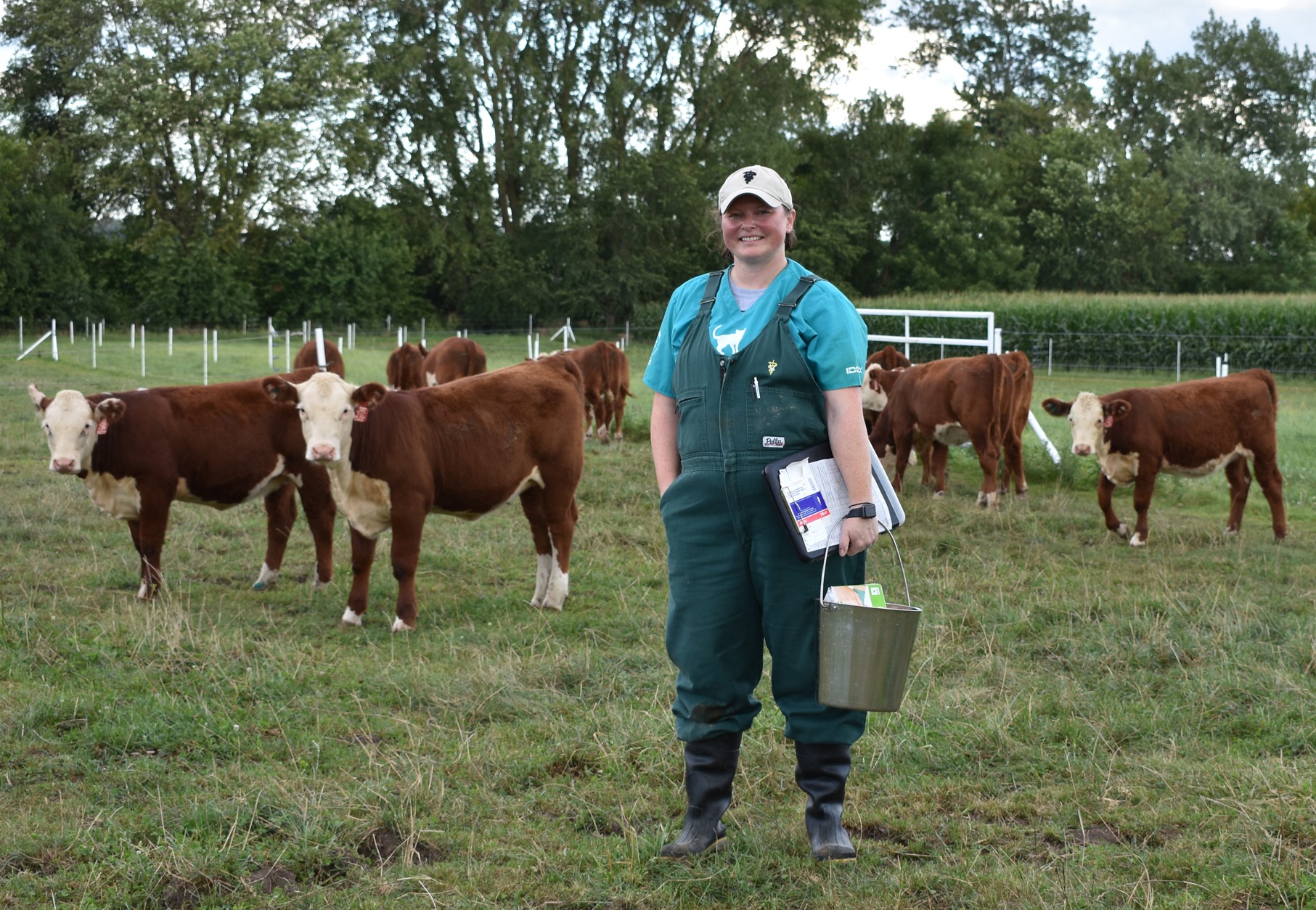 She is a mixed practice veterinarian at Ashton Animal Clinics, meaning one-third of her business is large animals and two-thirds are small animals.

Like other rural veterinarians, Dr. Lynda has seen a shift in the animals that she sees on farms and at her clinics. Previous owners/veterinarians Drs. McEniry and Larson were primarily large animal veterinarians who attended to cattle and hogs on area farms. Towards the end of their veterinary careers they began to also work with small animals such as cats and dogs.

“We still have cow-calf and feedlot animals as well as pigs that we provide veterinary services for on farms,” said Dr. Lynda. “However, many more of our clients’ farms are hobby farms which have some horses, sheep, donkeys, show cattle, goats and small ruminants. My practice of veterinary medicine includes consultation on animal care with production and hobby farmers.”

Dr. Lynda says she likes the variety of animals she cares for today. Her rural background puts her at ease with farm animals, having grown up raising hogs on the Gould family farm in Maple Park. 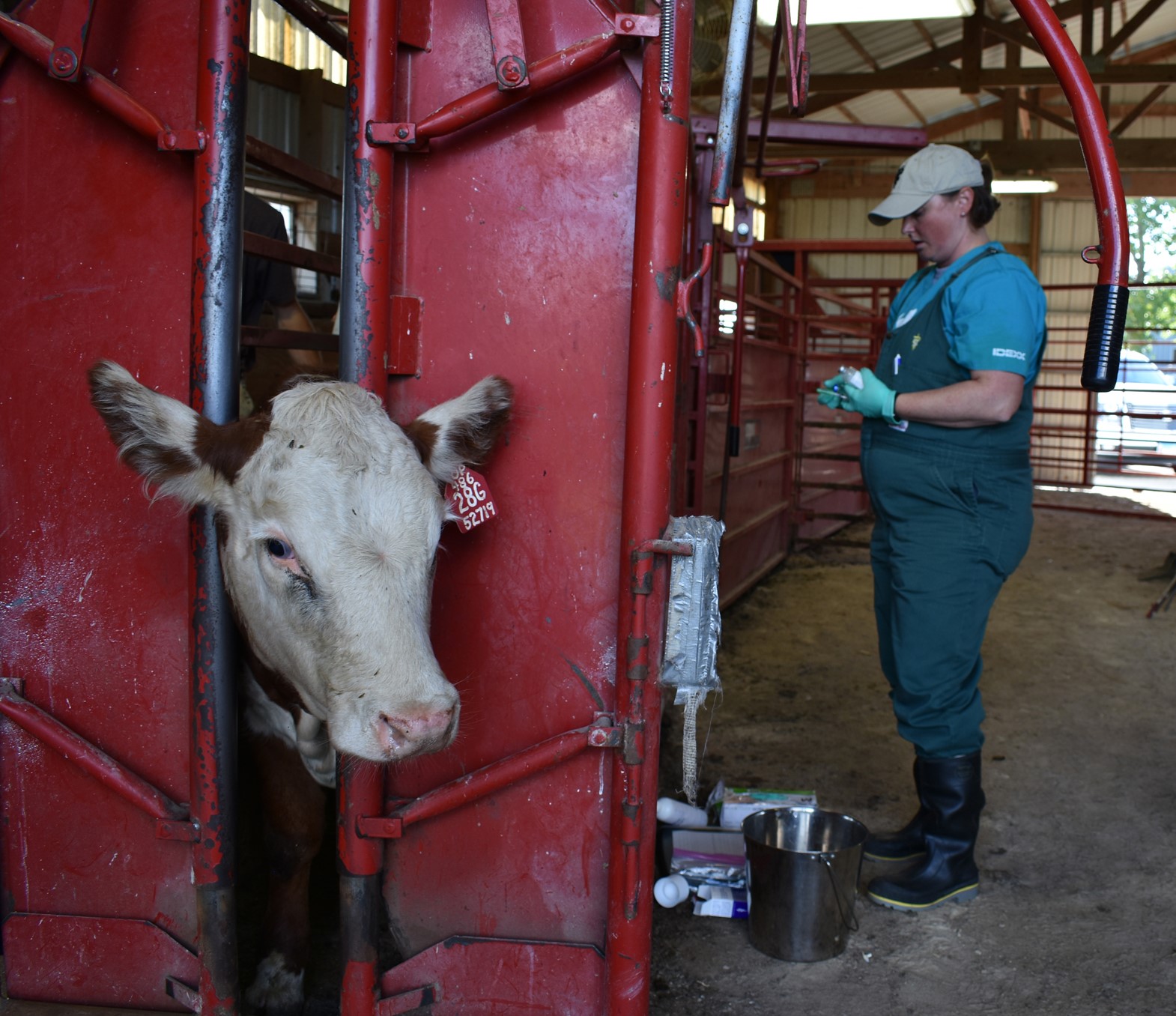 But, she will tell you being a veterinarian wasn’t always her dream job. “I started out in pre-medicine. Then after a couple of years I realized I missed livestock and the ag community. So going to vet school was an easy transition.”

She graduated from the University of Illinois College of Veterinary Medicine in 2009. She also completed her undergraduate degree there, graduating with high honors by making the Bronze Tablet.

In 2009, Dr. Lynda was hired to join the Ashton Clinic as a second veterinarian. Three years later she purchased the clinic and has grown the business to a three-vet mixed animal clinic. This year she bought a second clinic at Kaneville, outside of Elburn.

The best part of her job: “No two days are alike,” she stated. “There’s always a different problem.” That also is her least favorite aspect of being a DVM – “unpredictable days.” 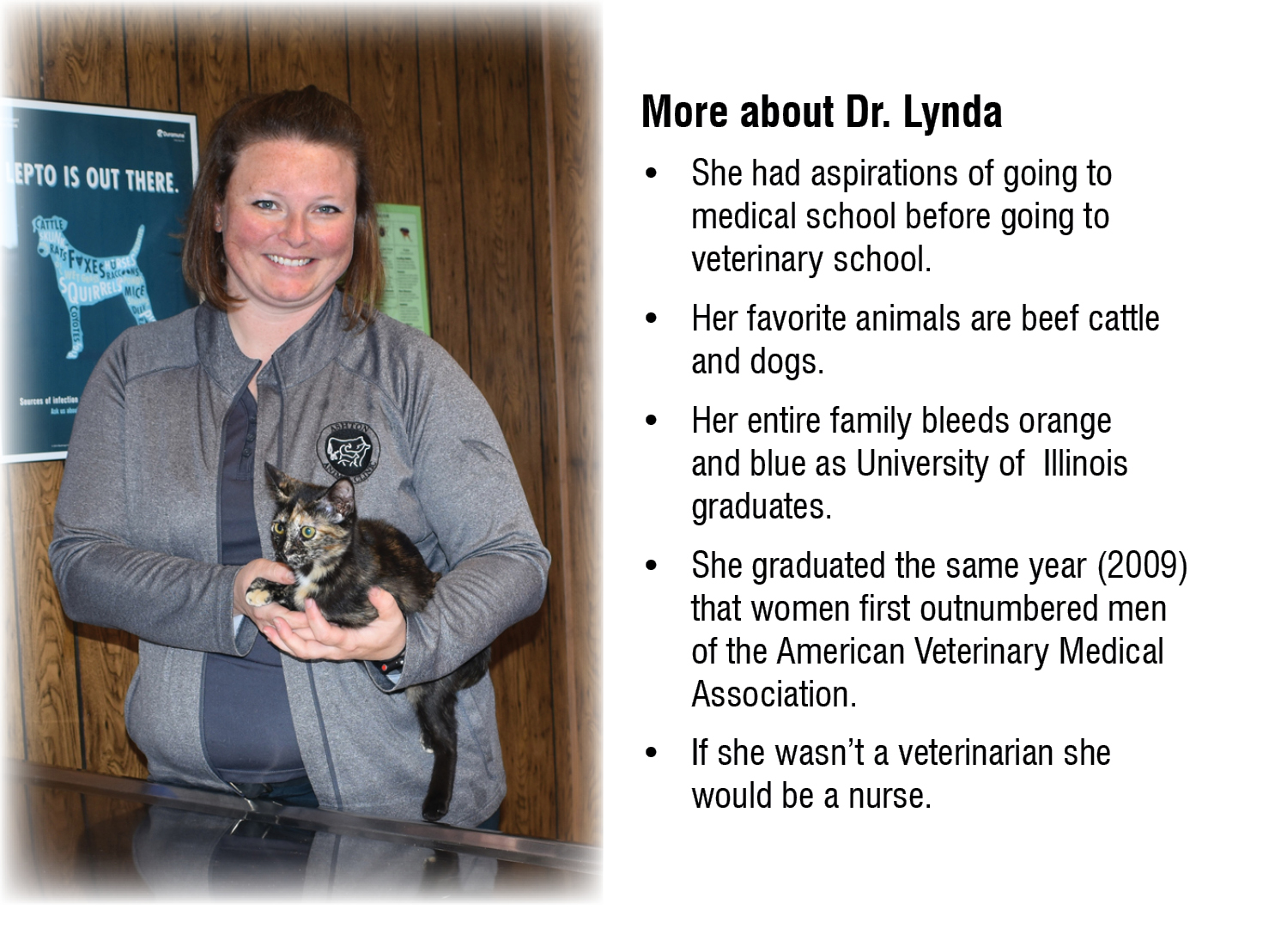 In the future she hopes to continue to grow the clinics and hire at least two more veterinarians. “There’s a real shortage of veterinarians,” stated Dr. Lynda. “Particularly, large animal veterinarians. It’s a tight job market.”

Having time off is important to this female veterinarian. Daily she juggles her veterinary work with her young family. Her husband, Austin Shingledecker, is a fireman and they have two young children Ellie and Hudson. When she does have some extra time she likes to cook and travel.

Malta Veterinary Hospital has been in business for over 50 years. Doc Lund started the business on the south side of town which later was acquired by Dr. Chet Palmer, who built the current clinical building in 1977. Dr. Bill Augustine joined Palmer in the practice and eventually purchased the Veterinary Hospital. 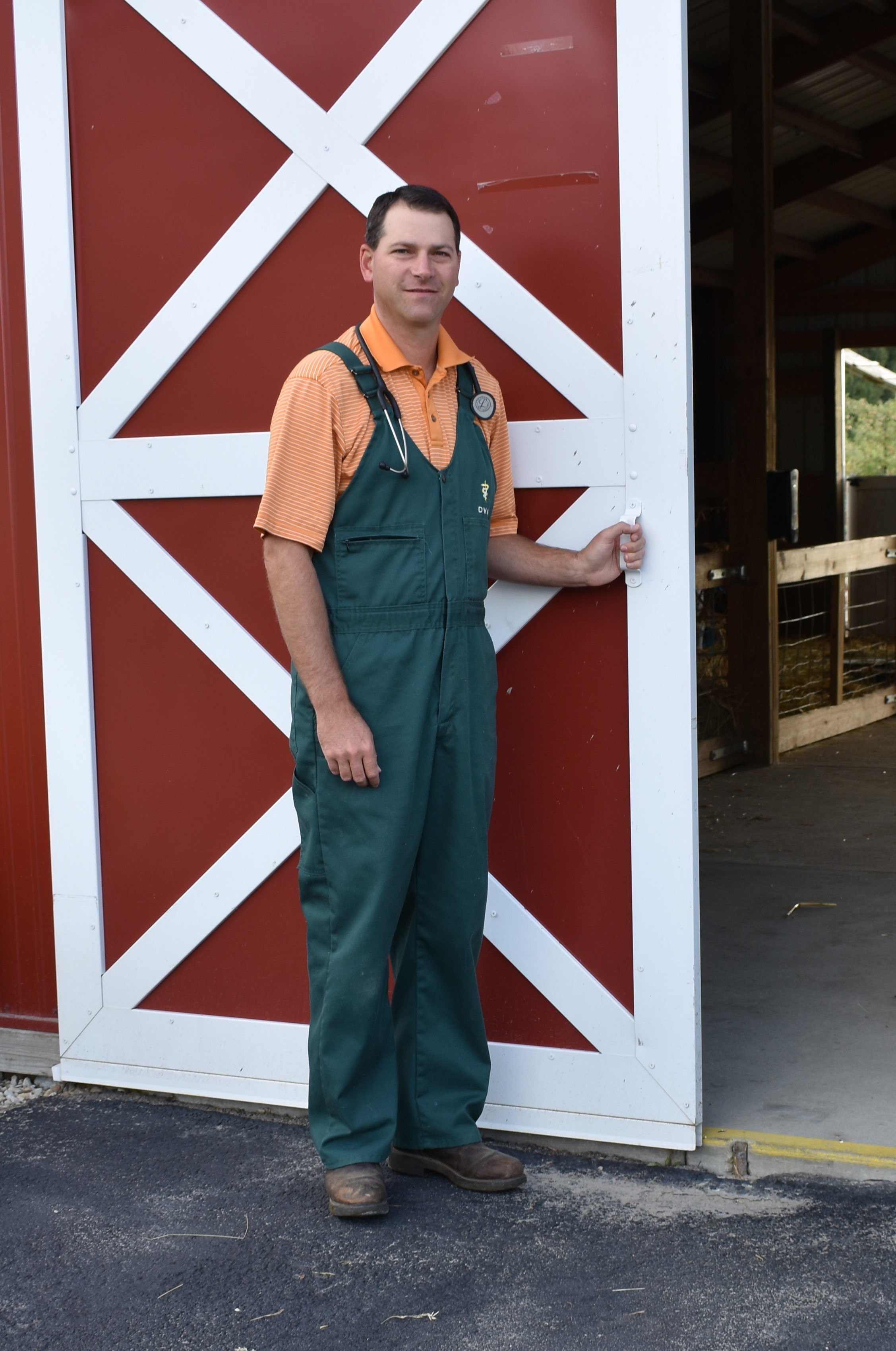 “I remember coming to the clinic as a preschooler, with Dad,” said Paul Augustine. “Then going on farm calls.”

The family-owned clinic, located on Rt. 38 west of Malta, was some days sort of a home away from home for the Augustines who lived south of town. Owning the clinic and having some of their own animals kept the family engaged in animal husbandry. Paul especially liked riding his horses during his youth.

These personal experiences provided Paul with the platform for choosing to become a veterinarian.

Paul graduated from the University of Illinois College of Veterinary Medicine in 2007. He also completed his undergraduate studies at the U of I in animal science.

Dr. Paul then returned to the family business to join his father in the veterinary practice. “Our family consists of veterinarians and teachers,” explained Paul. He followed the same career path as his father and his sister chose to be a teacher, like their mother.

Veterinary medicine changed from the time his father became a vet in the mid-1970s to when Dr. Paul joined the practice 12 years ago. “Dad’s share of work was 80% with large animals, like cattle and hogs. Now, my work is about 20% with large animals and 80% with small animals.” 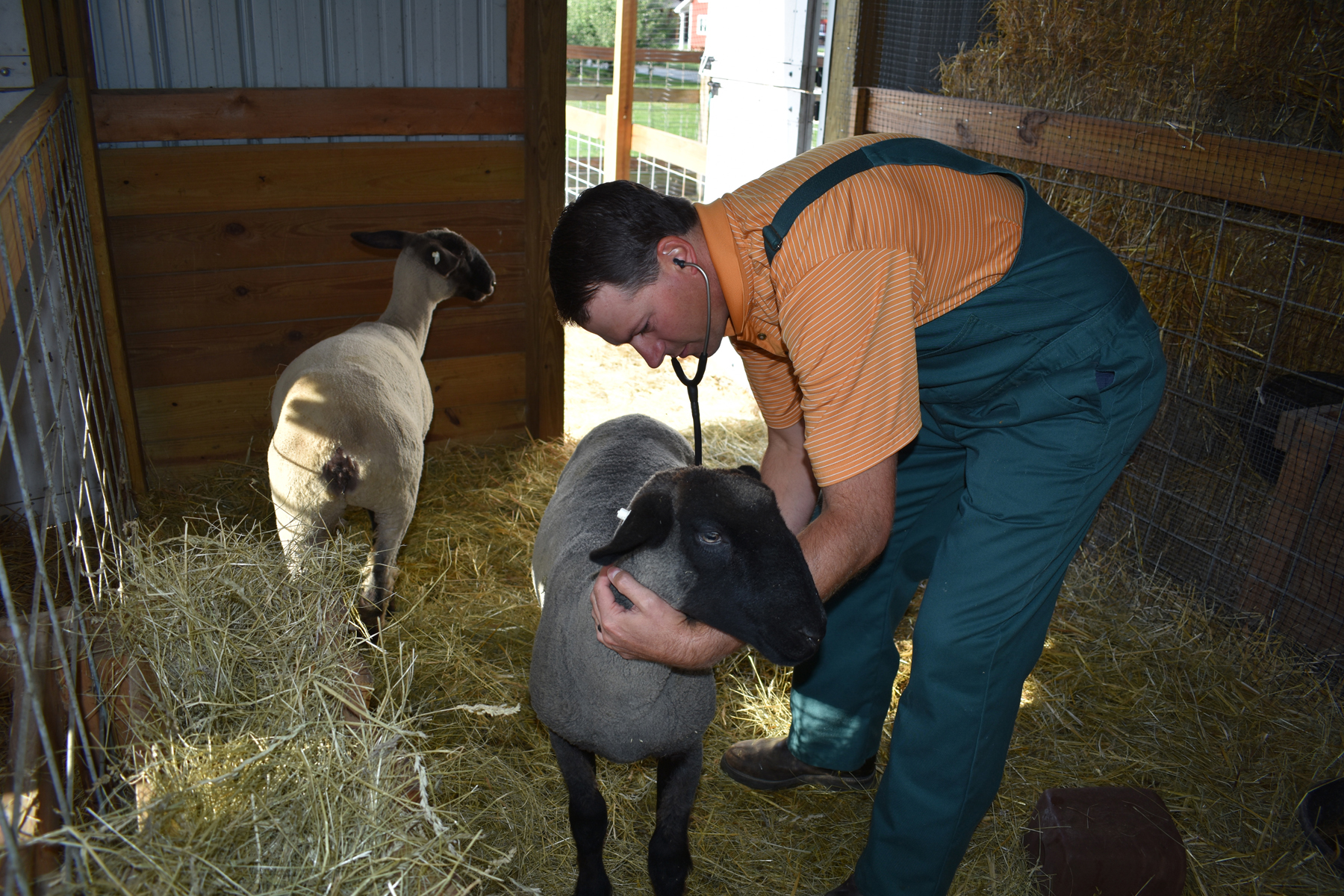 Besides the shift in animal systems, Dr. Paul also noted that farmers are doing more of the preventive health care measures. “Years ago veterinarians did most of the vaccines. Dad would castrate pigs and give them booster shots. Not anymore. Farmers do it themselves.”

Yet Dr. Paul still makes large animal farm calls for animal sicknesses, diseases and birthing problems, but many of his farm visits are at hobby farms and include consultations. At the clinic, he typically takes care of small animals with a variety of health needs and performs surgeries.

The 40-year-old veterinarian likes being a mixed animal veterinarian. “I like the interaction between animals and people. There are different challenges every day and I like that too because it keeps me on my toes!” 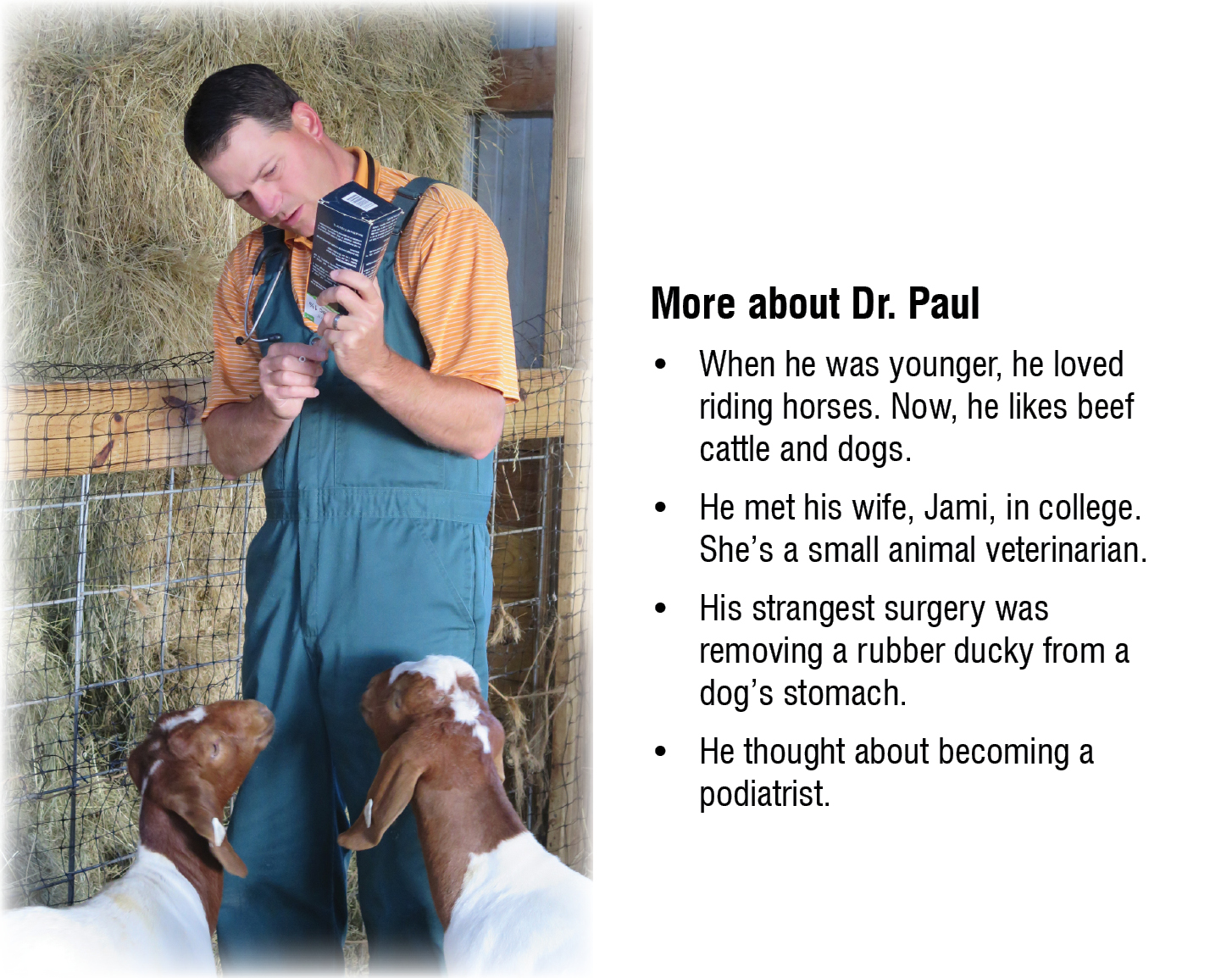 What frustrates the animal doctor is “not being able to do what needs to be done to make an animal better, based on financial limitations, the animal’s health status or other reasons.” That’s what keeps him up at night.

He and his wife, Jami, a small animal veterinarian, frequently discuss the future of their industry. Some of the changes they see coming are: insurance coverage for pets, people being exposed to more medical information via the internet and self-diagnosis of animals, opportunities for more specialized animal health services, and the trend towards corporations acquiring clinics.

Dr. Paul says his semi-retired father occasionally fills in for him at their family-owned clinic to give him a break and allow Paul to enjoy an afternoon off to play a game of golf.