It’s hard to drive through the countryside and not notice when there are large, round bales scattered among fields and farms, but what are they? Round bales are typically crops such as alfalfa, grasses, wheat, oats and corn. These crops are compressed to make handling, transport, and storage more convenient.

A piece of farm machinery called a baler is used to compact the crop mechanically. Once complete, round bales can weigh more than 1,000 lbs and measure around 5 feet in circumference. These finished bales are wrapped with netting or a plastic cover depending on its intended use. Each baled crop has a different usage. 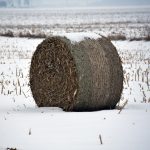 The cut remains of cornstalks left after the corn plant is harvested can be used for cattle bedding. Cornstalks are typically only baled when there is a shortage of straw. 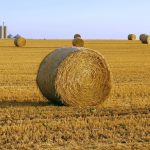 Straw is often used for cattle and horse bedding
but can also be used as a feed component for cattle.
Straw is made from the hollow stems of wheat or oats. 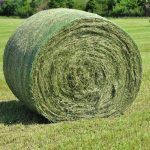 Hay is used as livestock feed. It can vary from a dark green color when freshly baled to a lighter green after time in storage. Hay can either be a single plant species or a mixture of plants. Alfalfa, clover, ryegrass, and timothy are commonly grown for hay.