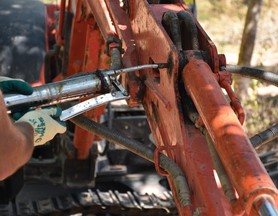 Most kinds of machinery with moving parts need grease for lubrication. Machinery needing grease require a special tool to get the grease exactly where it’s supposed to go. Thus, the grease gun.

Grease consists of oil combined with a substance which makes it thicker, such as lithium. Grease is used in places where it is impractical to lubricate often, or where plain oil—being runny—would quickly leak away.

How does a grease gun work?

A grease gun consists of four main parts: 1) a grease tube or cartridge which holds the grease, 2) a plunger and spring which keeps pressure on the grease within the grease tube (similar to how a syringe works), 3) a lever, trigger, or pump which provides pressure to force the grease out of the tube, and 4) a flexible hose or stiff tube through which the lubricant is forced from the grease gun and into a grease fitting on the machine being lubricated.

What is a grease fitting? 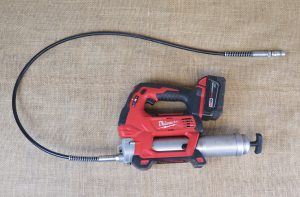 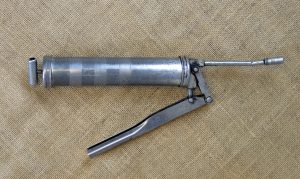