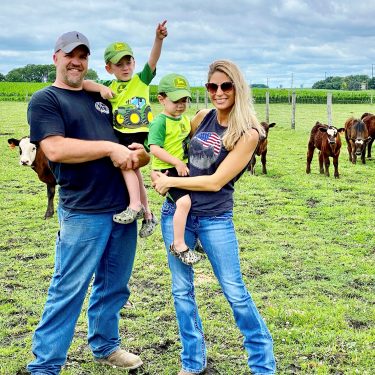 A: Our family has raised feedlot cattle on this farm for many years, but more recently added the cow/calf herd. Caring for the animals is similar, but different, based on their function and purpose.

They are in fact two totally different ways of raising the same animal. Short answer is every generation that has run this farm has added another major component to it and this cow/calf herd was our contribution to the farm adding to the feedlot that originally started here.

The biggest difference in raising feedlot cattle versus cows is the length of time you will have each. The feedlot cattle will begin their time in the lot at about 800 lbs. or roughly 1½ years old. Six months later they will be ready for market at 1500 lbs. to be processed into beef.

The cows on the other hand can be used for reproducing the beef herd and remain fertile for at least a decade, having one calf per year. In fact the oldest cow recorded in history was 49 years old and produced 39 calves in her lifetime!
Now that is a bit extreme, but I have heard of plenty of beef cows reproducing well into their 20’s. That being said, the care and maintenance for them will certainly be different than the feedlot cattle whose lifespan is about two years.

The animals eat different diets in order to accomplish their goal. With feedlot cattle we want them to gain weight rather quickly to be full grown and go to the market as “fat cattle” for processing. If we fed the cows the same way they would be so overweight they could not do their job of reproducing efficiently or live a long life for that matter. We feed them mostly pasture grass and hay to stay lean and fit, while the feedlot cattle get a mixture of corn, silage, distillers, and straw.

We treat each animal for illnesses, but find ourselves investing more in the cow herd because we keep them longer, which means more health issues may arise. The cow also gives us more of a return over time than a single feedlot animal will. For example, a young feedlot calf may have a problem such as pneumonia, pink eye, or an injured leg, while a mother cow could have any of those issues plus many other additional issues may arise with her such as miscarriage, retained placenta, uterine prolapse, or mastitis to name a few. There is also more routine maintenance that needs to be done with the cow/calf herd such as hoof trims and more vaccinations over the years.

Manure management is different as well due to the set-up of each group. There are many more cattle (400 head capacity) in a confined space in the feedlot. The manure produced in the first section of the feedlot which is a concrete floor, has to be scraped up every three weeks and the second part of the feedlot where they are standing over slats has to have the pits below the slats (where all the manure goes down) pumped and hauled out to the fields every six months. Whereas, the cow/calf herd has a much broader area with 30-40 cows and calves over eight acres of pasture.

The last major difference is we get to know the cow-calf herd a lot more over many years versus six months in the feedlot. Our momma cows are pretty tame because we work with them a lot – in the chute for vaccinations, artificial insemination, pregnancy checks and treating them, or helping them with calf delivery. And when we are not doing those things we are doing daily herd checks to monitor calving, breeding, and illnesses or injuries we may see. Along the way we may stop and give them a pat on the head, a scratching on the neck, or a good brushing to our favorites as we know each one by name! And we cannot say the same for the feedlot.

But each group has their function and purpose on this farm and we enjoy raising them both and doing it all here at C & B Farms!