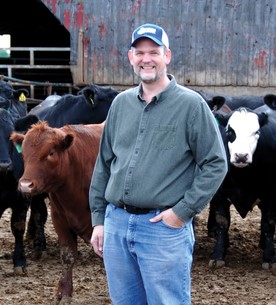 Answer: Pens allow farmers to sort cattle by size, gender, diet and quantity. This separation offers uniformity and a better environment for the beef cattle.

Often, I get the questions, “Why do you have so many pens of cattle?  Can’t they all just be together?”

The simple answer is no…when you are talking about cattle numbers close to 100, and especially if you have heifers and steers on the farm, it’s important to have separation.

For starters, I separate heifers (females) from steers (males). Unless the heifers have been spayed, which isn’t very common for cattle, the steers will ride the heifers when they cycle, and this could lead to injury, extra stress, and poor rates of gain.

I also have a pen for sick or lame cattle. This pen isolates animals that are ill/injured and could infect others on the premises with their sickness. It is nice to have the animals you treat in an area where you can watch them more closely. However, it is usually better to have a couple of animals in the sick pen and not just one, because the herd mentality can trigger stress when the cattle are not with another animal.

Also, when cattle are sorted to be sold to the buyers, they are placed in a separate pen. Most call it the “show pen” because that is where you show off your best picks for market.

A receiving pen is often used by larger feedlots. This is where the cattle will be allowed to rest and receive clean hay or straw, water and even electrolytes if needed. After long rides on a truck during shipping, this method before sorting or separating the cattle has proven to be a valuable practice.

Pens, in general, allow for organization and a flow of cattle through the facility. From smallest or newest to the largest or oldest, it is usually safer to work and sort cattle in smaller groups than larger ones.

Got a question for a farmer?
Submit your farm and food questions to connections@dekalbfarmbureau.org. We will share questions with our local farmers and publish their answers as space allows in upcoming issues of CONNECTIONS.