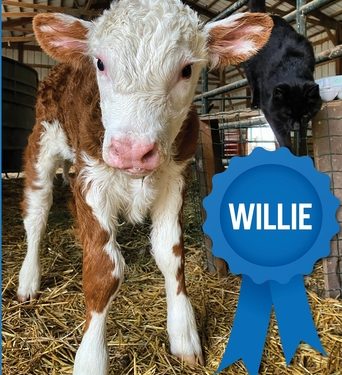 Willie was the winner of the “Farm Fan Favorite” Calf Contest!

Willie is a Hereford bull calf at the Baenziger Farm in rural Kingston. He is one of 30 calves which were in the contest sponsored by the Baenzigers and DeKalb County Farm Bureau.

Willie received the most votes at Farm Bureau and through the C & B Farms Facebook page. Photos of the calves were featured in the November issue of CONNECTIONS.

All of the calves in the contest were named after country singers, including Willie, whose namesake is Willie Nelson
As the calf of purebred Herefords Kelsi and Money Time, Willie’s genetics shined through! He was born with perfect Hereford markings and weighed 103 lbs. Matt and Mandy Baenziger say that Willie is now 9 months old and weighs about 700 lbs. He has a laidback temperament and would make a great 4-H steer.

Coming in second and third were calves Cash and Gary, respectively.

Individuals entered the contest, but one day care center in Sycamore – Land of Learning – had an entire class vote for their favorite calf (pictured).